Neil Young and the International Harvesters – A Treasure 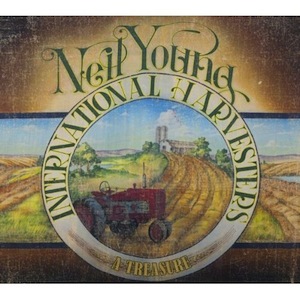 Are you ready for the country? So sings Neil Young on the song of the same name, the second track of his new live release, A Treasure. But this should probably be the first track on the album, since it’s more than just a fast, raunchy, countrified blues number; it’s something like an aesthetic standpoint. Young asks us if we can handle this side of him. Are you ready for the country? If you are, then you need to get this album.

This ain’t your father’s Neil Young, unless of course your dad listens to Waylon Jennings, Townes Van Zandt, and/or once owned a confederate flag. Neil was a musical shapeshifter in the 1980s, after a decade and a half of establishing himself as classic rock royalty in bands like Buffalo Springfield, CSN&Y, and Crazy Horse. As part of the burgeoning acid folk/folk rock/psychedelic scene of late ’60s Los Angeles, he brought an edge to the soft vocal harmonies of Crosby, Stills, and Nash, and his biting guitar rocks your inner core on songs like “Ohio” and “Southern Man”. In 1982, Young released Trans, a synth-heavy rock album that could almost be the soundtrack to the original Tron. 1983 saw the release of Everybody’s Rockin’, an album of rockabilly-flavored 1950s rock and roll. And in 1985, Neil dropped Old Ways, an album that his label didn’t want to release, saying that it was too country.

In the midst of that creative period, Young toured with the International Harvesters, a group of musicians who could revel in the country twang of the Old Ways material. Their concerts, in 1984 and 1985, are captured here for the first time on A Treasure. Of course, Neil Young is no stranger to southern music; “Are You Ready for the Country?” was first recorded on the 1972 gem Harvest, and the country sound has always been integral to this singer-songwriter’s world. The live version of “Are You Ready…” brings out the country stomp, played at a much faster and more aggressive clip than the original studio version. Rufus Thibodeaux’s fiddle flies out in front, with Young’s phlanged guitar substituting for the Hank Williams twang of honky-tonk.

A Treasure was cobbled together from various recordings made during Neil’s fall 1984 and 1985 tours, but it arcs like a real show, coming to a frenzied peak with the most rocking selection on here, the album-closing “Grey Riders”. Never before released, and long considered a fan favorite, “Grey Riders” is a monster of Young’s “Cinnamon Girl” classic rock sound. Thibodeaux’s crying fiddle is still there, and the fast country backbeat dominates the verses and chorus, but it’s all about the heavily distorted, syncopated guitar riff in between verses, and Young’s wailing, over-driven guitar solo.

Along the way, A Treasure visits a variety of Southern styles. “It Might Have Been” is fast Nashville sound, dominated by fiddle and Young’s nasally voice, with longtime Young collaborator Ben Keith on pedal steel guitar. “Bound for Glory” is a dramatic narrative ballad, a sad country love story. The soulful country ballad “Nothing Is Perfect” features gospel backing vocals, which lend strong and commanding support to Neil’s reedy tenor, while bowed bass and barrel-house piano contribute that old-time homey sound. Banjo adds a frolicky bluegrass feel to “Get Back to the Country”, as Young sings, “Back where it all began.” It’s high-powered, Ã¼ber fast rock bluegrass, with electric guitars and drums commingling with the fiddle, banjo, and pedal steel.

There’s plenty of harder stuff on here, too. “Motor City” has gritty guitars, and the working class ethos of ’80s rockers like George Thorogood or John Mellencamp lurks in the background. Except that Neil Young brings more humor, more artistry, and more rawness to the sound than either of those commercial rockers. “Soul of a Woman” is a 12-bar blues, hearkening back to a ’50s rock and roll sound. It’s the country tinge that Elvis, Carl Perkins, and Buddy Holly had, but with more grit, more drive, more overdrive on the guitars (and a totally bad-ass blues fiddle solo).

The nearly eight-minute “Southern Pacific”–a chugging lament on train culture–is the centerpiece of the second half of the album. The train screams into your headphones with a fast rock backbeat and lyrics full of melancholy and nostalgia. Anthony Crawford’s totally raw banjo solo, complete with noisy fret scratching, sounds like the sound of rusty train brakes. Young’s voice soars with urgency, delivering a commanding performance of this socially conscious tune, channeling the plight of the American worker into song.

The album is being released in a variety of media, including a deluxe CD/Blu-ray combo pack featuring live footage of the ’84-’85 Harvesters when available. Longtime Neil Young fans and completists will salivate that this incredibly fruitful collaboration is finally an official release and that songs like “Grey Riders”, which previously existed only as grainy bootlegs, have been lovingly remastered. This was Young’s offering on Record Store Day, telling something of the affection he has for this time period. Yes, it’s a live album, but not “this is what he’s been doing recently.” If anything, this feels more like a vault release of a new band with familiar faces. Above all, you can feel the exuberance that comes from playing raw, unbridled live music, and there are few from that generation who excel at this better than Neil Young. Old man, take a look at your life, indeed.