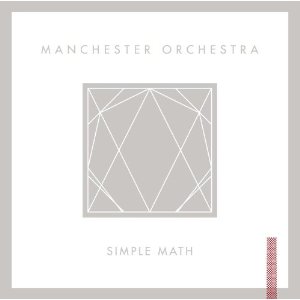 “Dear everyone I ever really knew,” sings Manchester Orchestra frontman Andy Hull on “Deer”, the opening track of the band’s newest and most daring effort, Simple Math. Easy guitar layers reside underneath Hull’s voice as the album begins to build before leading the listener on a 45-minute journey. An album built upon its predecessors, Simple Math is easy to love, particularly for any listener familiar with the band’s sound. Although this is the Atlanta quintet’s third official release, Simple Math is refreshing, with tracks that are remarkably accessible and lyrics that leave the listener saying, “Wait—I do feel like that.”

With each of its nine tracks seeming like a journal entry into Hull’s mind, a few of them stand out as irresistible fun. “April Fool”, the band’s latest single, is one of the album’s strongest moments, as Hull claims he’s got “that rock and that roll,” which is more than evident by the song’s close. This particular track begs to be heard, with its strong guitar riffs and pulsating drum lines complimenting Hull’s voice to an undeniable degree.

On a more hypercritical level, Simple Math as a whole feels like a concept album that nearly accomplishes what it sets out for, falling just short of the finish line. With strong vocals and song variety, Simple Math is more than just an average rock record, matching every expectation that was laid out by 2009’s Mean Everything to Nothing. And although the band doesn’t completely succeed at creating a concept album, they do succeed in making an album that’s worth many listens.