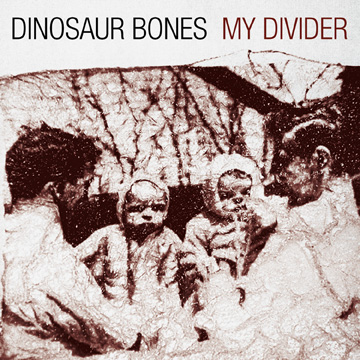 I’ve been feeling a little shell-shocked lately. Between Arcade Fire’s gigantic Grammy win and a certain English outfit dominating the universe, there’s a lot of hype and energy swirling around the rock world right now. Thankfully, I found a small reprieve from the chaos in the form of the new LP from Toronto’s Dinosaur Bones, My Divider. It’s an 11-song effort that sweetly marries wonderful pop sensibilities and the driving noise of rock and roll at its most simplistic. Plus, there are no hilarious Tumblr accounts or offensive dancing involved.

A press release for the LP described it as a “collage of influence, combining the swagger and grit of NYC garage with the earnest emotion of Radiohead and the Smiths.” As much as I try not to give them too much credit, the rep behind this write-up is pretty dead-on. I immediately appreciated this LP’s earnest and uncompromising love for everything really great and dramatic about pop music. Tracks like “Sharks in the Sand” and “Bombs in the Night” have super catchy hooks, with the latter being especially Smiths-esque and full of a light, bubbly feel and an air of romance that is without pretense or snark. The former also has the same kind of energy, albeit with a more menacing feel thanks to lines like “It’s not love I demand.” It also doesn’t hurt that singer/guitarist Ben Fox has pipes like a less-hardened Julian Casablancas, a voice that is engaging in its sugary undertones and boyish charm.

The rest of the band backs up that innocent appeal with some sophisticated but non-complex musical arrangements. There’s a touch of anger to those two songs in particular and a kind of confidence and force to the rhythm. But for the combination of pop and rock, nothing is as efficient as “Hunters”. The beginning barrage of drone and noise falls apart to a cascade of cliched indie guitar sounds, with a slight dance-rock energy gurgling just under the layers of instrumentation. Its subject material of vampires adds a kind of immature (in a good way) narrative to the track as a stand in for perhaps the dark, alluring side of rock and roll (“Someone told me they’ll dance with your daughters all night”).

The latter half of the album sees the band go for more subtlety as opposed to bombastic displays of rock and roll romanticism. However, they go out with a bang on “N.Y.E.”. The word “sweeping” gets thrown around a lot (by myself included), but there’s no better word to describe just how impacting the chorus is. Here, they really swing for the emotional fences, ripping at every heartstring and shred of decency any listener could possibly muster. From there on out, though, the dominant sentiment is best represented by the gnarly combo of “Royalty” and the title track. “Royalty” still jangles with the trademark energy of earlier songs, but there’s a kind of darker intent. Like they’ve all but mastered thus far, the clues lie hidden in the chorus, where the optimism and wide-eyed worldview have begun their transformation into deep-seated feelings of distrust and inadequacy. As the album closer, the title track only solidifies the newfound sullen feeling. The ending couple of minutes in particular are the most important. Here, the clean-cut yet exploratory feel of the other 10 tracks devolves into a mess of hazy feedback and effects. While normally a 180 like this might leave a sour taste in my mouth, their use of the sonic blitz is minimal and most effective, creating a profound effect where the sunshine of pop and the shadow of malcontent rock finally collapse into one another in a wonderful musical abyss.

For everything I’ve written about this record, if you take away just one thing from it, let it be this: If you’re in need of a great yet simple rock record, one with its heart on its sleeve and a subtle feeling of grandiosity, then dig no deeper than this effort.