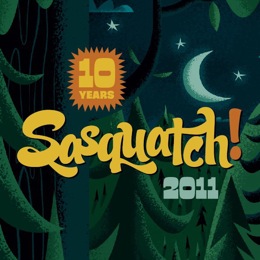 Sasquatch! Music Festival celebrates 10 years in 2011, and along with the previously confirmed Foo Fighters, the festivities will be headed by Death Cab for Cutie, Modest Mouse, Wilco, and The Flaming Lips, who will perform their 1999 classic, The Soft Bulletin, in its entirety.

Set to take place from May 27th-30th at the Gorge Amphitheatre in George, Washington, the 2011 bill also features The Decemberists, Bright Eyes, Iron & Wine, Robyn, Wolf Parade, Chromeo, Beach House, Yeasayer, and three recently reunited outfits: Death From Above 1979, Guided By Voices, and Archers of Loaf.

Update: You can find Sasquatch!’s day-by-day schedule here or below.