MotÃ¶rhead – The World Is Yours 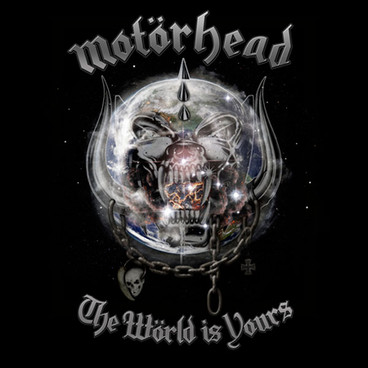 Ian Kilmister, aka Lemmy, is the sole constant member of the British rock band, MotÃ¶rhead. This man is a vocalist, a bassist, a rock god in circles, and he is aging, like all living things are wont to do. Sooner or later, we will see the demise of this metal figurehead, but as with any bastion of the early heavies, a reign must not simply burn out, but fucking explode in a glorious inferno. The World Is Yours is imperfect, true, but it’s nonetheless a respected addition to the MotÃ¶rhead canon.

This is 2011, meaning MotÃ¶rhead has managed to consistently quake the very core of our planet for almost four decades. The maniacal boar’s head that MotÃ¶rhead represents will be a historical landmark for rock music fans, but a glance toward the band’s live performance on Conan recently will distinctly show what time and substances have done to Lemmy’s trademark voice of sandpaper and stern resolve, a voice that struggles to shine on The World Is Yours.

Lemmy seems to strain a great deal, while also competing with a lot of guitar static (“Get Back In Line”) and double-bass drums (“Born To Lose”), and yet on more strict rock-and-roll terms, the music swings and howls at the moon while Lemmy goes from proudly echoing (“Devils In My Hand”) to barely audible (“Rock N’ Roll Music”). All over the board, The World Is Yours sounds exactly like a MotÃ¶rhead album without question: Lemmy’s presence saturates every crevice of attitude, every mark of old school gruff. Much like Australia’s own AC/DC, MotÃ¶rhead provides its signature sound zero leniency, never failing to sound exactly like it intends to.

Meanwhile, a song like “Waiting On The Snake”, which pedaling back 10 years or so, would’ve take us all by storm, gets weighed down by the obvious wear-and-tear that Lemmy’s vocals have endured over time. In the end, it boils down to this: MotÃ¶rhead has passed its prime, and unlike other mainstays such as Slayer, the tree-branch tendrils of Father Time are more dominant than Lemmy might wish them to be, barreling down his raspy, rusted-metal throat.

“Brotherhood Of Man” is our second evidential keystone here, distinguishable from The World Is Ours’ previous inclusions due to Lemmy’s opting for spoken word against shouted lyrics. Lemmy begins sounding like an underworld conduit incarnate, a bearer of bad news to the Earthlings bound to mortality. MotÃ¶rhead becomes less like rock royalty and more like the messenger you wish to shoot down and give mercy. On the whole, while The World Is Ours could be considered amongst the general collection of MotÃ¶rhead works, it is meager in that we see the harbinger within.

We know this is likely the end of an era, and that my friends, is why you need The World Is Ours. The music is standard and expected, but impressive as always; Lemmy really gives 100%, and though it shows the weakening ends, he proves to be ever vigilant. It’s a curtain call, a salute to the masters by the master himself, and frankly, as moderate as The World Is Ours might be, one cannot deny that what Lemmy says, goes.

Jack Black would be proud.