Watch: The Ghost of a Saber Tooth Tiger hit Fallon 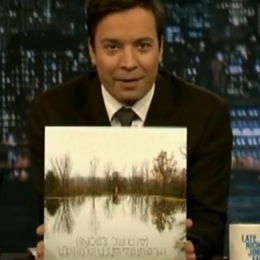 It’s hard to find a band with a funnier sounding name, but The Ghost of a Saber Tooth Tiger are anything but a joke. The group comprised of Sean Lennon and musician/model/girlfriend Charlotte Kemp Muhl met backstage at Coachella in 2004 and have been making music together full time since 2008. Last night, the duo made their late night television debut with a performance of “Jardin Du Luxembourg” — off their recent album Acoustic Sessions — on Late Night with Jimmy Fallon.

Dressed in early 20th century period clothes and backed by a rotating brass player, the overall aesthetic of the performance was more “Paris Cafe” than “Late Night stage”. It’s also impossible to watch Lennon perform without noting how similar his voice is to his famous father, and the way he blends with Muhl is even more eerily enticing. So while it might not have been a Willow Smith cover, the group’s haunted sound seemed to go over quite well. Actually, J-Fal’s squealing excitement says it all.

Watch the performance above via of The Audio Perv.