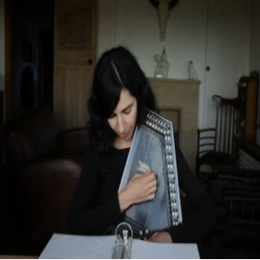 All of the news surrounding Ms. Polly Jean Harvey’s ninth studio LP started out rather cryptically but once she finally let the cat out of the bag, the 41-year-old has been quite generous with samples from the disc. She’s given us tastes of six new songs from Let England Shake – one of our most important albums of 2011 – and now we’re being graced with even more of the official music video treatment.

We’ve already seen a clip that featured “The Last Living Rose” but, thanks to TwentyFourBit, you can now feast your eyes on the clip for Shake’s first single, “The Words That Maketh Murder”. Our own Chris Coplan already reported that the song would be available digitally next Monday and physically on February 7th, but the Seamus Murphy-directed clip is something else.

It opens with a shot of our heroine strumming her autoharp in the living room and then interchanges between moving images of dead soldiers, young boys in uniform, and old people ballroom dancing. There are also bees, folks frolicking in the park, and some driving around town.

Check out the video (which is just the second installment of a 12-part video project) below and sit tight for the album’s release, which happens on February 15th via Vagrant Records.