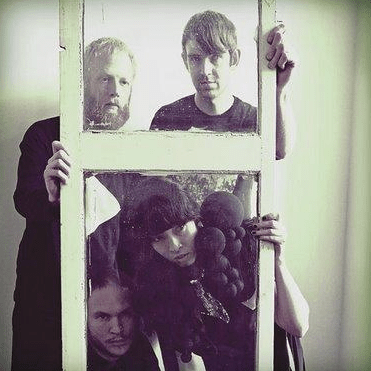 Sweden has a reputation of being a hotbed for captivating and unique music, thanks to artists such as electronic soulsters Little Dragon. Hailing from Gothenburg, Little Dragon is a guitar-free band comprised of four high school friends that were rejected from music school and collaborated with other artists (including José González and Koop) before coming together. While their 2007 self-titled debut has a downtempo, jazz feel, and 2009s Machine Dreams takes a more danceable, cool electronic pop direction, irresistible rhythms and a sensual, soulful voice hypnotizes the listener throughout both records. Ecstatic word of mouth has surrounded Little Dragon following their collaboration with Gorillaz on the Plastic Beach gems Empire Ants and To Binge, and during their extensive touring of the States in support of Machine Dreams, a tour that included mesmerizing performances at festivals such as Coachella and Treasure Island. With a new album on the horizon and an ongoing tour with more to come, Little Dragon is primed to conquer the world in 2011.

A couple hours before taking the stage at Chicagos Lincoln Hall, drummer Erik Bodin spent some time chatting with Consequence of Sound about what to expect from their upcoming third album, Ritual Union, touring with Gorillaz, and growing as a band with childhood friends.

What can people expect from Little Dragon live, versus on record?

Were trying to make it a journey. All live, a lot of mistakes, and we are always trying to find something new every night. We just want to have fun; Itll be a party. A dark party, sometimes. I love being in the studio and being in that bubble, but when we break out of the bubble and play live and see its working on people, thats where you get your real payback.

So how is touring America compared to playing in Sweden?

We only did seven or eight shows in Sweden all this time as Little Dragon. One of the biggest differences is that we never play in Sweden. And people are getting to know us now, maybe because they hear we are getting good reception over here in America. Its funny how that plays a big role. With the crowd, its nice to be here in America because people are good at expressing if they like something; They really show it. In Sweden, sometimes people can be shy and take a while to warm up and get into it.

When is the new album coming?

Its going to be called Ritual Union and were mastering it now, so hopefully its going to be out in April/May. Were not really settled with how we are going to release it here in America and whos going to release it, so we dont have an exact date. But were definitely aiming for before the summer. Were very excited about this album because weve constantly been playing live now for the last three years, and it definitely feels refreshing to move onto something new.

So what can we expect in terms of sound from Ritual Union?

I think its a mix of the two albums that weve done so far. It could be a little bit rougher, maybe. I think weve been seeking to be more direct in a way, so hopefully its rougher and more direct. It feels like were putting some more of our homemade soul into it.

One of the distinctive aspects of Little Dragon has always been that soulful sound.

We always loved American soul music. Ive always been a big fan, and its been nice to throw that into the mix.

The name Little Dragon comes from a nickname given to frontwoman Yukimi Naganos temper while recording in the studio. When recording Ritual Union, did she live up to the bands namesake?

Actually, not so much anymore. I think its because this time out shes found herself and she has a new way to express herself instead of getting angry and putting fire on everything. But sometimes, yeah, she does. Were going to keep the name, but it feels like now can all have that temperament nowadays; Its for all of us.

Yes, were a no-guitar band. We were thinking about buying a guitar. Im thinking about learning how to play the guitar, actually, but so far there have been no guitars in this band. Were fundamentalists. But why that is, Im not really sure. It just turned out that way and its fun to make a thing out of it.

So you all were friends growing up in Gothenburg, and collaborated with other artists before forming Little Dragon.  What motivated you to get together and form the band?

A friend of ours had heard some music that we had made, the first music that we ever recorded, and basically we were just playing and never really recording anything. And then, when we recorded some songs, our friend was so excited that he wanted to release a 7. I think that was around 2005 and he realized, Hey, we should try this out and see what happens. I think thats what motivated us: that he liked our music so much that he wanted to release it.

How does being childhood friends affect the band dynamics, versus working with other musicians you have not known as long?

Its the reason Im doing this, for example. Just because Im dealing with my friends, I know I can be honest and I know they can be honest with me.  Sometimes it might be painful, but Id rather go down that road than to just do something that makes people bounce off at the end of the day. Sometimes when youre in the band where there are one or two guys making the music, and then you are just there as a session guy, already there is that kind of separation. I am so happy that I can be around my old friends here in America talking to you about this project, this music that we made in Gothenburg that has reached out so far, and that Im doing it with my old friends who have known me since I was 16. Its wonderful.

With 85 people traveling, its so many people and it feels like we were all on this big school trip. Every day we get to say hello to Bobby Womack. Hello, Bobby Womack! We were just rolling around starstruck all the time.

What are some artists with whom you hope to collaborate?

I would like to work with Jimi Hendrix, but hes dead. Theres so many that we respect. HÃ¥kan [Wirenstrand] wants to do something with Vangelis, a Greek synth phantom.

What is Little Dragon listening to and reading while on tour?

I love to read, but Ive never been good at finding new writers. Haruki Murakami, a Japanese author who is very good at making things into the twilight, dreamy elements, but very real at the same time. And music, I think we are constantly looking, but I know Fredrik [KÃ¤llgren Wallin] told me about Radio Dept. yesterday. Ive just been to South Africa, so I have a lot of South African house. Theres too much music in my iPod now that I dont know what it is.