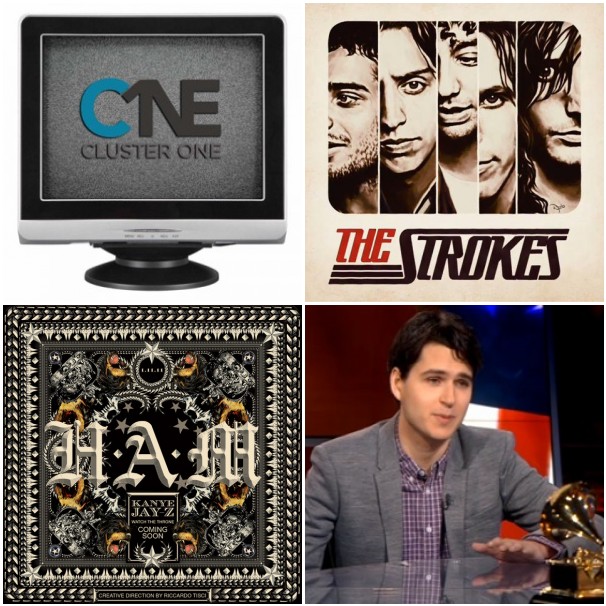 Think about it. In a single week a hotly anticipated album can drop, festival rumors, no matter how legit or just plain entertaining, can begin to circulate, and a larger-than-life band can announce a string of tour dates. Then there the more unfortunate events. It seems like each loss we lose someone or something that means a great deal to us.

As usual, the list below illustrates this idea better than I ever could. It speaks for itself.

It’s only January, and we’ve already got a lot to look forward to. Stay tuned.

— Cluster 1 finally made its debut. Check out the first broadcast here.

— We published our list of the “50 Most Important Albums 2011” to help you sort through the scores of new titles that will come out this year.

— The Strokes‘ fourth LP has an official release date.

— Panda Bear‘s Tomboy is slated for an April release.

— Aretha Franklin denied reports that she has pancreatic cancer.

— To commemorate the untimely death of Jay Reatard, the garage rocker’s Shattered Club said this week that it will offer unreleased material exclusively to its members.

— Drake revealed a few collaboraters for his forthcoming record.

— Remember when we told you that Daft Punk would be The Third Twin at a Spanish music festival? We were wrong.

— The Mountain Goats want to be on Law & Order: SVU, but they can’t do it without your help. Click here to find out what you can do.

— Lil Wayne did…um, okay, he did a lot of stuff. Too much to list in this post.

— Like Kanye, Snoop Dogg will offer fans tracks through a weekly online series, only his is called “Puff Puff Pass Tuesdays.”

— Eminem signed some big names to his record label.

— Vampire Weekend and The Black Keys “battled it out” for Stephen Colbert‘s Grammy vote.

— While we’re on the subject, Arcade Fire, Eminem, and Lady Gaga, among others, are set to perform at this year’s ceremony.

— Rothbury may or may not return this year. We’ll see.

— No, Coachella hasn’t revealed its lineup yet. In the meantime, get a load of these fake ones.

— Ask yourself, “At your first Bonnaroo, what was the first thing you witnessed that made you say ‘Wow, I’m actually here'”? Do it and you can win a fabulous prize in the latest CoS Giveaway!

— Be sure to help us win big at the Weblog Awards while you’re at it.

— Chris Coplan posted another thought-provoking edition of Nod Your Head.

— Karina Halle scored a great interview as well, with the “‘architect’ of the turntable” himself, DJ Rob Swift.

— The Decemberists are back with a follow-up to 2009’s The Hazards of Love. Read our official review, courtesy of Dan Caffrey, here.

— Did we make our best-of lists too early this time? Winston Robbins thinks so. Check out his review of Ghostface Killah‘s Apollo Kids, and then decide for yourself.