Wanda Jackson  The Party Ain’t Over 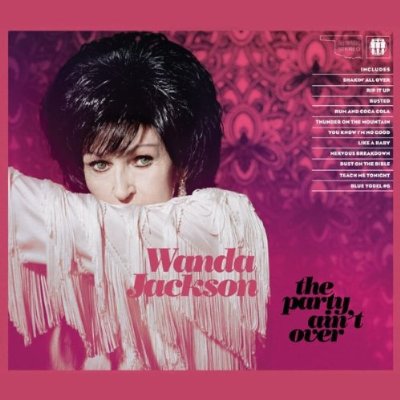 Back in 2004 and hot off the successes of White Blood Cells and Elephant, alt-rock hero/guitar god/man of the decade Jack White reached out to his longtime idol, country legend Loretta Lynn, in the hopes of bringing her out of retirement to record new material. The result was one of the most acclaimed albums of the year, Van Lear Rose, on which White handled all production and guitar duties. White’s indie-cred helped propel Lynn’s legend to new heights and introduce her vast catalog to a new generation of listeners and fans, as was evidenced by the release of last year’s Coal Miner’s Daughter: A Tribute to Loretta Lynn, a tribute album that featured pop acts of all kinds, from Paramore and Kid Rock to Jack White’s own White Stripes. White proved to be the perfect candidate for the job; his inherent devotion to Lynn’s musical style of old kept the album from veering off into hackneyed attempts at updating a very established artist’s sound, while his carefully added touches here and there made Lynn sound simultaneously hip and as much her old self as ever.

So when the news of White’s plans to cut an LP with another one of his idols, rockabilly/country legend Wanda Jackson, surfaced, comparisons were inevitable. Here was White, again at the helm of another revered country singer’s career reboot attempt–one whose music and image has left an indelible mark on White’s own. But from the blasts of horns that herald the start of the record on Jackson’s splendid album-opening cover of the classic “Shakin’ All Over”, it’s clear that things couldn’t be more different this time around: The Party Ain’t Over is less an attempt at career revival and more like a celebration of Jackson’s storied career. Where Loretta Lynn rediscovered her songwriting abilities on Van Lear Rose, Jackson tries her hand at reinterpreting a carefully picked mix of old standards and contemporary tunes, to great effect. Even the most recent of the covers on the record, Bob Dylan’s “Thunder on the Mountain” and Amy Winehouse’s “You Know I’m No Good”, were originally written with a lean to the retro side of things that, with White’s huge arrangements, suit Jackson perfectly.

Her signature rasp is as intact as ever and she lets loose on a number of tracks, perhaps no more than she does on the aforementioned “Shakin’ All Over”. Jackson sounds most at home on the 50s-esque rave-up of “Rip It Up” and the swinging blues of “Busted”, made famous by Little Richard and Johnny Cash respectively. The surprisingly tender “Teach Me Tonight” sees the singer try on an affectionate croon that meshes perfectly with the dreamy keys and backing vocals. Her stirring rendition of Bob Dylan’s 2006 instant classic, “Thunder on the Mountain”, is another highlight. Jackson isn’t afraid to turn the tune on its head, changing the lyrical subject from Dylan’s puzzling ramblings about Alicia Keys to that of a certain Jerry Lee, while White adds a couple of fiery solos in between verses for good measure. Of course, the most talked about of the album’s song choices is Amy Winehouse’s “You Know I’m No Good”. Packed to the brim with sexual tension, the sultry tune would be a tough sell for anyone, let alone a 73-year-old country singer. But her charm and snarling take on the racy verses win out in the end, easily making for one of the record’s most memorable songs.

It’s interesting to hear White, who’s been a noted minimalist on his past records, embrace a much more bombastic sound on The Party Ain’t Over and make good use of the amazing musicians at his disposal. The star-studded Third Man House Band (which includes Jack Lawrence [The Dead Weather/The Raconteurs], Carl Broemel [My Morning Jacket], Patrick Keeler [The Raconteurs], and Jack White, among others) provides the perfect backing to Jackson’s rugged voice, allowing her to showcase her talents in a variety of styles; the Caribbean-styled “Rum and Coca-Cola” and the organ-tinged gospel of “Dust on the Bible” highlight her range as well as her band’s. A spare take on blues standard “Blue Yodel #9”, which sees Jackson yodeling her heart out and trims the accompaniment to just Jack White on acoustic guitar, closes things out in interesting fashion.

All in all, The Party Ain’t Over proves to be a bold success. Most musicians Wanda Jackson’s age are content with resting on the laurels and acclaim they’ve collected over their career, putting out boxset after boxset of remastered and rereleased material. Rather than going the tired “return-to-roots”/”back to basics” route, Jack White manages to cast the legend in a new light, showcasing her skill as a performer and storyteller with his dynamic approach to analog recording. To be fair, The Party Ain’t Over wouldn’t have gotten half the attention it deserved if White didn’t opt to feature on, produce, and tour it, and in all honesty, it’d hardly be as interesting. That said (and despite his efforts to take a step out of the spotlight), it’s about as much his record as it is hers.