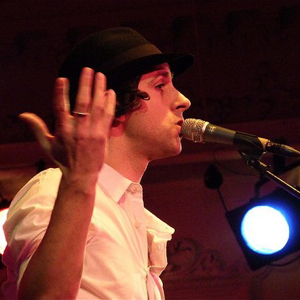 Subject of a recent CoS Where We Live feature, Bush Hall provided an admirable platform for Maximo Parks Paul Smith to air his solo work, encapsulated in the October release of Margins. There is nothing that marginal about tonight however. The snow currently paralysing much of the transport network outside London has reduced a sold-out gig to around three-quarters full, if that. The heavily coated and booted crowd though make up in warmth what they lack in numbers and there seem to be so many people here from North East England that it feels almost like a home gig for Smith.

Support act for the evening, hand-picked by Paul Smith for this current tour of Europe and the UK, is Gravenhurst. For those not in the know, the name seems to be a cue for variable speculation. Must be a band named after a sleepy English village or maybe that town in Canada, aka Gateway to Muskoka? Then why is there only one guy on stage. No, this Gravenhurst is the one-man vehicle of north of Glastonbury musician, Nick Talbot. Best described as folk meets feedback, Talbot cuts an unusual rock star persona. In his Shoegazer t-shirt, the first impression is decidedly of someone who might help staff an IT help desk.

Talbots music quickly dispels the image. Its quirky, engaging electric folk with shades of psychedelia. The opener I Turn My Head To The Forest Floor shows off Gravenhursts resonant finger-picking and soft high vocal while Saints from his excellent 2007 album, The Western Lands, is performed note perfect with subtle guitar effects and bass drones lending the impression that there really is a band along side him. Gravenhurst continues to impress throughout a seven-song set of light and shade. The singers downbeat patter is of one who plainly could hold an audience with charm and repartee if he so wished. Tonight though Gravenhurst seems to want to let the music do the talking, even if the audience feels compelled to do the same during quieter moments. The musician silences them with his final song Black Holes In The Sand which moves from gentle country folk territory to a staggering electronic overload frenzy of guitar effects and feedback. All in all, it’s an outstanding set.

While waiting for Paul Smith to take the stage, the red drapes at Bush Hall once more remind me of The White Lodge where dwarves talk backwards and that line where we’re from, the birds sing a pretty song and there’s always music in the air. It seems an apt thought for the evening. Smith comes on to an affectionate reception, almost like a return to the family. He is among friends on stage too, accompanied by guitarist Rachel Lancaster, bass player Claire Adams and drummer, Andrew Hodson, all friends from his musical past. The band remain patiently still as Smith launches into a solo rendition of the pretty if low-key While You’re in the Bath from Margins before they kick in to add drive to the medium paced rocker, North Atlantic Drift.

Successive songs from the solo record follow with Smith and his ensemble trying hard to mix up the delivery, some full-on, some solo, some part band. Alone, I Wouldve Dropped works particularly well with Lancasters filigree fills drifting over Smiths angular chords, while on I Wonder If the pretty dark haired guitarist in the black cocktail dress duets on acoustic as Smith works some compelling effects on his electric. This Heat shuffles along to a tropical vibe with Claire Adams swapping bass for maracas, while she uses her bass with wonderful effect as a lead to accompany Smith on the stark Arthur Russell song, A Little Lost. Throughout the set, Smiths vocal retain a lilt and a softness that smacks of honesty and sincerity. His between song chat is both entertaining and endearing.

More from the solo album follows with maybe the strongest saved for last as the broodingly atmospheric Our Lady of Lourdes plays out the set. Theres a sense that these are songs that require a few listens to begin to leave a more lasting impression. Lyrically, Paul Smith has come in for some criticism with his solo release: over-earnest, naively romantic, facile, maybe even pretentious, but I find the words cutely observational, intimate, and often quite candid. They seem real.

Much to the crowd’s surprise, Smith returns for a selection of encores. Pinball, the closer from Margins with just the singer backed by a plaintive ukulele, is actually played by drummer Hodson, and then a solo Tanned from Maximo Parks third album, Quicken The Heart, rolls out, too. Fortunately, Smith, again solo, finds time to fit in By The Monument from Our Earthly Pleasures, which he segues with Apply Some Pressure (off A Certain Trigger), which gives representation to all sides of Paul Smiths recorded life.

By night’s closing, Smith ended with an affirmation that Maximo Park is still alive and well, despite breaking out from the write, record, release and tour circle while Smith did his solo thing. This gig was quite a distance apart from Maximo Parks style but whatever the future holds, it was heartening on this occasion to listen to a front man who by-passed any ego in a simple show of the pleasure of playing live.

Gravenhurst setlist:
I Turn My Head To The Forest Floor
Saints
The Ghost Of Saint Paul
Bluebeard
Grand Union Canal
The Prize
Black Holes In The Sand

Paul Smith setlist:
While You’re in the Bath
North Atlantic Drift
The Crush and the Shatter
Improvement/Denouement
Alone, I Wouldve Dropped
Strange Friction
I Wonder If
This Heat
A Little Lost (Arthur Russell cover)
I Drew You Sleeping
The Tingles
Dare Not Dive
Our Lady of Lourdes
Encore:
Pinball
Tanned
By The Monument/Apply Some Pressure