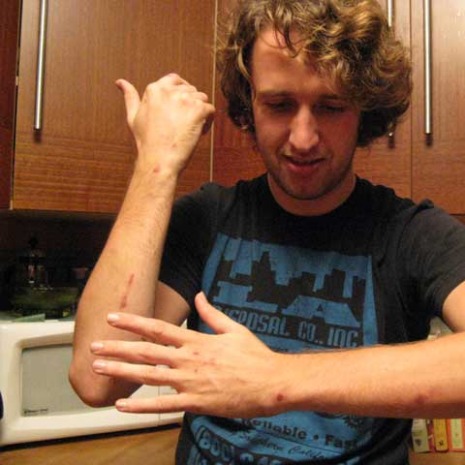 Sean Carlson is a busy man, but he doesn’t seem to mind. And if your life revolved around putting on concerts, hanging out with your best friends and eating (our nearly forty minute phone conversation revolved around the FYF founder’s search for dinner, namely “veggie soul food”), it would be hard find much cause for complaint, even if it meant also being without some of the luxuries that others consider necessary. With three events under the FYF banner happening in just this week alone (including the return of the beloved FYF Scavenger Hunt and hometown heroes Ariel Pink’s Haunted Graffiti’s return), I was surprised he was able to make time to talk at all. Being busy by choice is not something that’s common amongst young people. But at this level, I understand Sean Carlson before I even meet him.

My first contact with Carlson was after I had reviewed the September incarnation of the seven-year old annual summer  event. It was only my second time there, but FYF was clearly more in my consciousness than the sum of those 20 or so hours I had logged on the dusty fields. FYF was becoming (or maybe it has already been) a presence not just in L.A., but across the nation. CoS writer Winston Robbins intended on driving down from Salt Lake City to cover it with me (a car accident the day before prevented that). Carlson notes that it’s been a slow progression. “I started this when I was 18,” he says. “And it took place at a bunch of little venues in Echo Park. For free. And we’re slowly moving to this national level where people fly in for it and it’s a lot bigger than it was.”

Whatever you have heard about the event is probably some shade of the truth. Carlson is the first to admit that some mistakes hurt it, pointing out that though there will always be web-crawlers wanting to talk shit. “There were problems at this year’s festival and it’s stuff that can easily be fixed,” he says.

He has talked enough in the past few months about the festival’s issues and, when it comes up, he starts nearly every sentence with the preamble “I don’t want to get into specifics.” He might feel as if he has given plenty of opportunity for people to voice their concerns. His response to a minor web and media backlash? He took responsibility and promised to fix it. He even offered to call people personally. For someone working at a Web site where his bosses have never even heard his voice, it was this personal spin that made me send Carlson a link of my review.