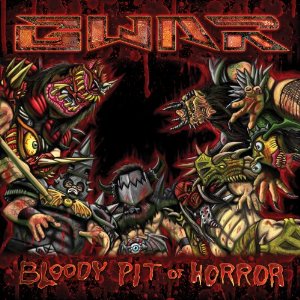 I can honestly say it’s hard to review an album by GWAR, the Virginia outfit mostly known for their grotesque live show and obscene heavy metal. GWAR is the kind of band that has established enough of a reputation that they don’t necessarily need to put out a new album. Bands like Primus and the Insane Clown Posse have achieved a similar status; they never have to make another record again, but their fans are more devoted than ever. GWAR is no different. The legions of fans who love GWAR really do love them, and have no will to stop buying their concert tickets and records. It just doesn’t matter anymore.

GWAR’s latest release, Bloody Pit of Horror, is a step in a more death-metal direction. With the pulse raising drums, bone crunching guitars and lightning fast riffs, this album definitely showcases various musical elements that show talent. However, it’s GWAR. There should be some expected factors on the newest record. The album is filled with obscene and disgusting lyrics. The songs suggest acts that we as people would never commit within our lifetime. It’s still somewhat enjoyable, but slightly stupid (no pun intended).

“Zombies, March!” kicks off the record and contains a guitar part that could make your fingers melt. The song itself is not bad, but one has to keep in mind that this is the work of GWAR, and therefore it should only be taken seriously to a certain degree. The music itself is fantastic, but the comic book imagery and twisted sense of humor is still apparent within the song. The same can be said for “Gathering of Ghouls”. The music itself is enjoyable, but it still seems very silly. I understand this is the typical GWAR aesthetic, but one can only bare so much.

“Storm is Coming” has all the potential in the world to be a fantastic metal track. The riffs are diabolical and the lyrics are actually slightly more evil than songs like “Fish Fuck”. Once again, though, the goofiness outshines everything else. The lyrics discuss a storm bringing mass amounts of death upon us, and while the song itself portrays dark imagery, it’s difficult for one to take the lyrics seriously. The black heart and Satanic soul are there, but I can’t get past the lyrical content. The next track definitely throws you a hilarious curve ball. “Tick-Tits” is literally about what the title says. It’s about a girl having her tits covered in insects. The song is blatantly obvious about it. They even chant “Tick-tits!” in the chorus!

“You Are My Meat” starts off with a very enchanting and engaging melody. Eventually, though, the lyrics state, “You are my meat/Get in the pan/You are my meat/So die like the rest/I consume your flesh/It’s all for the best.” This is very standard GWAR lyricism, and expected with their work. And while I enjoy it, I just can’t get past the hokey aspects of their songs. “Hail, Genocide!” follows, and once again is the same deal. The music is obviously smart, but their antics cover it up and continue to reveal, “This is GWAR.”

“The Litany of Slain” starts the album winding down. The track is very apocalyptic, and basically GWAR just calls out a number of celebrities and utters numerous obscenities. “Paris Hilton fucked a donkey,” is just one example of the content within the song, while the chords crush your bones. Dick Cheney, Houdini and John Kerry (“Fuck John Kerry/Very hairy”) are all mentioned within the track, and the disgusting lyrical suggestions made about each one make me both grimace and sneer. “Sick and Twisted” closes out Bloody Pit of Horror, and kicks off with a very lo-fi riff that leads into a thrash-metalocalypse that will leave a lasting impression on the listener.

If you like GWAR, worship their music, and follow them on tour regularly, this album is totally for you. GWAR is a band that caters to a specific crowd, and based on my knowledge of the fan base, I think you might really enjoy this record. To any casual metal listener or just somebody who has seen Empire Records, try some older GWAR first. This album is decent, and definitely listenable, but in terms of GWAR, one could have a better experience. GWAR doesn’t need to put out more albums, but they do. This one will suffice for now.