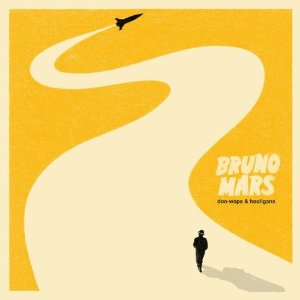 Twenty-five year old Bruno Mars has had as successful a 2010 as possibly any other musician, and he came out of virtually nowhere. He could be considered the Steve Nash of the music industry, throwing up assists with writing and lending  vocals on some of the biggest tracks of the year. “Billionaire” by Travie McCoy, “Nothin’ on You” from B.o.B, and “Fuck You” off the new Cee-Lo disc have all been ultimately successful songs this year, and Bruno Mars has had his hand in all of them. Just these accomplishments alone would have been enough for a big 2010, but he also released his debut album Doo-Wops & Hooligans, which is arguably one of the better debuts released this year.

The first track, “Grenade” makes you ask the question, “Who hurt you Bruno?” He tells about all of the things he would do for this “mad woman, bad woman,” including jumping in front of a train and putting a bullet through his brain. Ouch. This track, his second single, charted in the Top 20 and not only showcases his Michael Jackson-esque vocal range, but through the songs’ heavy, heartbreaking lyrics, makes you want to keep listening through the album to see what other stories he can tell.

The panty-dropping, number one smash hit “Just the Way You Are” is a sweet song for all the ladies who get too caught up in their looks. Mars sticks to the song’s name and insists that he wouldn’t want to change anything about his particular gal.You believe him, too. With an undeniably catchy chorus, it’s no surprise it’s already a radio staple this year (in addition to anyone’s wedding). The slow-jam R&B track “Our First Time” is a sexual song that again stays true to its name. With a Boyz II Men feel, it reveals yet another side of the young talent, using vivid images of a close encounter, portraying Mars as more than just a heartbroken soul. But that’s the beauty of these songs – the imagery. These songs come off as very real and genuine, and his nearly perfect vocal performances show his passion in these tender moments. He may have assisted other artists this year, carving up some big tracks, but don’t think for a minute that he didn’t save some of the best for himself.

“Talking to the Moon” may be the best of this collection. As with most of the other tunes, this track is primed for radio; a soft, sincere, piano-driven song about a lost love that has now gone. “Talking to the moon/trying to get to you/in hopes you’re on the other side, talking to me too/or am I a fool? who sits alone/Talking to the moon,” belts the vulnerable Mars. He plays so many different roles over the album, it’s tough to find out which of these love-anguished and brokenhearted men he truly is. He mixes up all these personas with such an eclectic array of sounds that it almost doesn’t matter. Seemingly, everything he will touch, no matter which character he chooses to be, will turn to vocal gold.

In return for all of his generous favors he has given other artists, they give back as well. Damien Marley joins him on the reggae jam “Liquor Store Blues”. B.o.B and Cee-Lo join forces on the album’s final track, “The Other Side”, a slow yet danceable tune which shines most when Cee-Lo takes over. And if you shell out the extra few bucks for the deluxe version, you can catch Lupe Fiasco on an alternate version of “Just the Way You Are”. Judging from this roster, it’s obvious that Mars has already gained the respect of his peers and that, after his banner year, his phone should continue ringing.

What we have in Bruno Mars is a fresh act with full confidence in his abilities in writing, producing, and performing. To say he is the next Michael Jackson is false, but he may not be that far off. This fulfilling 10 track album has very few holes, and if this is just a taste of what he has in the vaults for either himself or for other artists, he should be racking up some Grammy’s shortly.