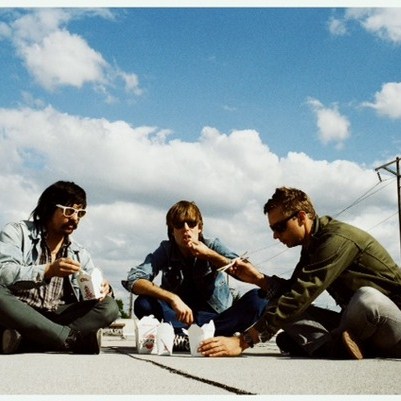 You may not remember that members of Islands and Man Man had joined forces, but you may remember that someone coined a new term called “doom-wop” and left everyone wondering. Ten months later, something has very suddenly come to fruition out of all that. Not only does the project have a name, but the new band has finished an album, joined Sub Pop, and signed on to open for Passion Pit — beginning tonight.

Former Unicorns and current Islands frontman Nick Thorburn (a.k.a. Nick Diamonds), Man Man lead singer Honus Honus, and Joe Plummer*, drummer of former Man Man tourmates Modest Mouse, now make up the trio that is Mister Heavenly. Update: Apparently movie star Michael Cera is a member, too. While Thorburn originally said the band probably wouldn’t release a traditional album, he has changed his mind and gone old-fashioned. According to a press release, the album happened by accident as Thorburn and Honus Honus were in the process of recording a one-off instrumental 7″. Sub Pop will release the full-length at an unspecified time in 2011.

For now, with Plummer rounding out the lineup, Mister Heavenly will be introducing doom-wop — a combination of “doomed love songs” and traditional doo-wop — to Passion Pit’s audiences on the band’s upcoming West Coast dates. The first will be tonight at Seattle’s Moore Theater, and the band will travel down the coast with Passion Pit to Portland, followed by six California gigs. The final two shows will take place in Las Vegas and Salt Lake City. Mister Heavenly will headline two of these dates without Passion Pit: December 10th at Salt Lake City’s Kilby Court and December 2nd at SF’s Café du Nord.

The full schedule is below.