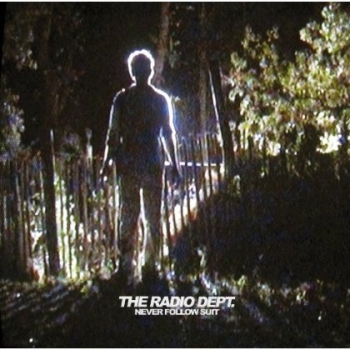 Sweden’s The Radio Dept. have spent more than a decade slowing teasing out their influences, ranging from post-punk, shoegaze, and new wave to Balearic pop and most recently dub. But thankfully, none of their releases have ever sounded contrived. More often, as best-represented on their debut, Lesser Matters, and most recent collection, Clinging to a Scheme, the Johan Duncanson-led trio cradle these sounds into a cohesive statement that, no matter more guitar- or synth-heavy, feels definitively their own.

Wistful, melancholy, self-assured, and always tasteful, to think of The Radio Dept. is to conjure listless afternoons spent missing not so much a loved one, but a crush or a fleeting glance from someone whose attention you’ve been craving for months. If this sounds passing and juvenile, consider the source: It’s no accident that three of the band’s songs ended up in the Sofia Coppola film Marie Antoinette, as much a typical story of hormonal youth as it is an excuse for basking in its excesses. Indeed, The Radio Dept., like so many of the modern chillwave ilk, thrive on reflecting nostalgia, but underneath their work is a brewing progressivism that negates the idea that they’re only interested in yesterdays. Duncanson may still sing of fated love, but, as “Never Follow Suit” indicated earlier this year when it first appeared on Clinging…, The Radio Dept. appear more eager than ever to transmit a different hue of their influences, this time more spacious and hypnotic. The Never Follow Suit EP largely accomplishes that task, its only misstep the inclusion of an eight-minute long remix of the title track commissioned from Pistol Disco that nearly treads into Thievery Corporation territory. Otherwise, the new approach extends their halcyon romanticism wonderfully.

You can reasonably divide Never Follows Suit into two camps: A more literal dub aesthetic colors “The One” and the appended title track — the two most obvious examples of a shift – while “Stay Off Route” and “On Your Side” evoke Air France and Saint Etienne-like Balearic dance sophistication. “The One” begins with a throbbing beat and the haunted simplicity of a low register bass note before endlessly echoing snare hits float above the arrangement, paving the way for the languid, near-Caribbean synth melodies to come. The transition from dark to light is initially off-setting, but it ultimately works to strengthen the case that the band is increasingly comfortable toying with a variety of dynamics. The title track that follows positions their intentions in clear view: Chorus-laden keys pivot on upstrokes between shakers as each sound dances around each other as if on some tripped-out Jamaican hideaway.

Eight minutes later, the casual shifts to more recognizable shades. “Stay Off Route” glows in Fennesz-ian, ambient warmth before a calmly-picked bass riff drives the melody into the ping-ponging comfort of a twee drum machine sequence. If you’ve heard previous gems like “Pulling Our Weight” (one of the songs that appeared in Marie Antoinette), this effect will sound familiar, though it shouldn’t be misstated that the band pulled the mood into fresh light, if ever so slightly. The beat becomes more austere as it enters “On Your Side”, a tried-and-true representation of the Scandinavian obsession with tepid Mediterranean pop. Acoustic guitars swell over a sprightly piano melody and a rhythmic thrust that shuns aggressiveness without compromising its pluck.

Unfortunately, there’s no room in either inn for “Never Swallow Fruit”, the tediously long remix from Radio Dept. friends and fellow Swedes Pistol Disco. Sure, it could be argued that the track is truer to dub traditions than the single, but that thinking — and the remix itself — misses the point. The Radio Dept. succeeds by referencing influential genres through transference, reverently sprinkling their work with muted aesthetic signifiers in lieu of outright derivations. Conversely, Pistol Disco turned what was respectful and innovative into something benign, a track better suited for a posh hotel lobby than at the tail-end of an impressive EP. (Muzak anyone?)

Whether Never Follow Suit is meant to be a fun, brief dalliance or a foray intuiting more substantive changes, The Radio Dept. nevertheless prove to be serious about dub, a genre with a lineage they’re careful not to mishandle. The remix aside, the EP is effective because it astutely reminds us of where they’ve been and likely hints at where they’re going — not the easiest task to pull off in a mere 12 minutes. Regardless of the path they follow, it’s refreshing to know that even the detours can be as promising as the road already known.