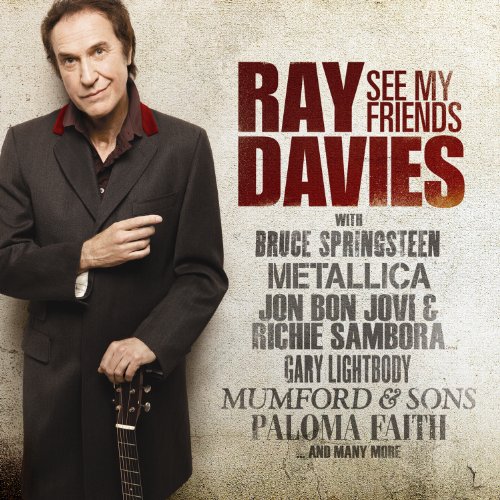 I don’t know what I expected. Remember that movie He’s Just Not That Into You? I’ve only seen a few minutes of it, but movies like that — where they try to impress the audience (your parents) by how many famous people they can get into one movie, only to feel more star-gazing than actual plot-telling — feel like dirty tricks. And it pertains to Ray Davies‘ collaborative remakes album, See My Friends, in that the assembly of duet partners is unreal. Beyond the giant names of Bruce Springsteen and Metallica, it also notably features peaking group Mumford & Sons in addition to a post-humonous cut from recently deceased Big Star frontman Alex Chilton. It’s easy to get lost in the impressive mix, but the artist line up is so diverse that the question of “Did it ever have a chance?” seems to echo in the folds of each number, making me feel like a fool for thinking success was a possibility.

The most glaring flaw to which nearly every number on See My Friends falls victim is the album’s seeming complete disregard for The Kinks as a band. Though Davies was the figurehead and chief creative force, The Kinks were a band. The classic songs Davies attacks and consistently falls short of were great for more than their words and their vocals. The originals sound youthful and adventurous, with some dating back more than 40 years, but these recently recorded songs, which feature much better technology and often quite young bands playing with Davies, come off as tired and uninspired. Davies has allowed rgw arrangements to age with his voice, but he never changes them enough to re-imagine anything. Sadly, it’s a bad covers album.

One of the strengths The Kinks used to their advantage was their ability to change their sound to suit the song, whether they wanted to evoke island sunsets or bar-room blues or just blend in to the 70’s rock that surrounded them. But that doesn’t excuse this compilation’s complete disregard for continuity or some sort of flow. Putting Lucinda Williams next to Metallica is jarring, but no transition ever sounds right on the entire collection, except the transitions that Billy Corgan and Mumford & Sons tunes take in the middle of their cuts, especially Corgan, who had the misfortune of having to perform “All Day and All Night”, a tired number any way you look at it. Weaving it with “Destroyer” is clever, letting Corgan sound like an idea man for a brief moment, breathing new life into well-worn territory.

But this cannot overshadow the bad ideas that populate the collection. Jon Bon Jovi and Richie Sambora strip the sentiment from the sentimental “Celluloid Heroes”, playing Los Angeles like Brandon Flowers’ plays Las Vegas on his new album. 70’s soft rock ballads are tricky becuase they were only acceptable in the 70’s, and the Bon Jovi-updating should have been predictable in its soulless execution. Spoon also strike-out big, taking a tune perfectly chosen for them in the more-experimental-at-the-time “See My Friends” and actually bringing it to more conventional territory. And further, they somehow don’t bring any element of their own sound to the song, with the vocals completely overwhelming the instrumentation. Spoon could have had a lot of fun with this tune, but the number sounds safe, serving only as a reminder of how lacking the entire collection really is.

And why do it? Is it for the music to find a new audience? Well, half the bands on here are nearly as old as Davies, so their audience is his audience. And the indie artists featured also don’t possess a lot of new ears for these classic songs. So with that ruled out and with it clear that the songs don’t really offer any creative re-workings, it gets narrowed down to a commercial move or a vanity project. Sure, you can’t fault anyone from saying yes when Davies calls up asking for a day of your time, but you can fault them for sounding like the thought put into it was literally one day. Tunes like these should be saved for surprise moments at the end of concerts, not recorded for re-listening.

Releasing it as a Davies album and not a Ray Davies tribute album is really misleading and unfortunate. As a tribute album, you could dismiss the collection as some noteworthy artists making Kinks songs that don’t compare to the originals. But with Davies putting his name on it, you have to interpret that the the man who wrote the songs actually thinks these are worthy to stand with his originals. And this simply is not the case and is worrisome for anyone thinking about how Davies views his classics and even his current taste level. Did he really come out of the Amy MacDonald recording session and think “That could be put in the same conversation as The Kinks version”? It is enough to really freak out a fan of The Kinks. Go back and listen to the source material and hear the intangibles: passion, chemistry and creativity. Why the originator would want grace the public with songs that only leave insights like “Frank Black and Ray Davies sound really similar” is beyond me.

When you write and record a song, there is no roadmap. See My Friends is limited by lines inside which the songs feel they need to color in order to make a picture, not knowing that the picture is already as clear as day. Take this however you want, but look at the artist list, and you’ll realize the two contributors who showed the most creativity were Billy Corgan and Mumford & Sons.

And I am not into Mumford & Sons whatsoever, but their versions of “Days” and “This Time Tomorrow” reinvent the tunes to suit their ability in pop-folk, and they are really strong cuts. The youth and enthusiasm they demonstrate is a sharp contrast with Paloma Faith and Gary Lightbody, who scream watered down adult contemporary. If you heard the recent statements from Win Butler about not being able to imagine Arcade Fire existing in ten years and how rock and roll is a young man’s game, it’s hard not to use this record as a supporting argument for the sentiment. Very few aging artists can maintain the creative passion of their youth, and their later careers are often supported primarily by nostalgia. But listening to the originals is a better way to revisit the feelings these songs may inspire. Listening to this will ultimately just depress you, learning that one of rock’s great artists has come to the point where he can’t realize when he’s hosting a karaoke night.