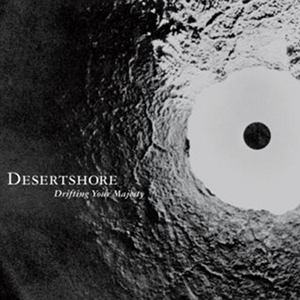 Desertshore may be a new name, but at least one of the faces should be familiar.  The band began as a side project for Red House Painters and Sun Kil Moon guitarist Phil Carney and classically trained pianist Chris Connolly. After a few years of periodic collaboration and jamming, what finally emerged is Drifting Your Majesty, an aptly titled record with the sound you’d expect from the players involved.

It is important to note that the record was produced by Sun Kil Moon/Red House Painters mastermind Mark Kozelek, as his influence is spewed all over the set’s 46 minutes. Either that, or this record provides insight into how large a role Carney plays in Kozelek’s aesthetic. For anyone familiar with either Red House Painters or Sun Kil Moon, there are few exotic moments on Drifting Your Majesty. That signature gloomy, drugged out, slow-rolling, country-tinged, post-folky music that Kozelek usually sings over with Sun Kil Moon (think “Moorestown”) fills the record.  In may ways, it’s Kozelek’s ‘Tranquil Horse”, minus the gorgeous, prophetic croon.

Sure, there are forays into new areas: dreampop, post-rock, some middle-eastern sounding scales, and maybe even some mathy moments, but for the most part, as the title suggests, the record drifts along a body of beautiful water we’re used to. It’s deeply dark and melancholic in spots, brighter and lighter in others. Which isn’t to say the record doesn’t have its merits, because it’s most certainly a gorgeous collection of songs. Just don’t think you’re setting sail for uncharted water.

This being said, the brief “Black Mirror Water” introduces us to a fresh assortment of textures for Carney, a distortion heavy, piano-laden shoegaze track, which coasts along eerie, dreamy synth. It’s really the only hint of these dreampop atmospheres on the record, so it’s not the best indicator of what’s to come. The immaculately lush, “The Town Alight” follows and feels like a country infused Mogwai, a sort of key accented post-folk-rock jam fit with slide guitar, crashing drums, and reverb laden fingerpicking. It’s one of the record’s highlights and also one of the set’s jauntier tunes. “Mojave Mirage” is the first track that really rubs the whole Kozelek thing in your face, even if by accident. It’s a subtle, slow-rolling Young-esque rain parade. The song’s drugged out guitar riff washes out onto a twang speckled shore blossoming with fluttering keys. Reverberating arpeggios cry over shimmering symbols for an emotional instrumental. Some middle-eastern sounding guitar scales enter towards the end, adding a somewhat new element into the beautiful, but well-established, mix.

The record’s sprawling title track serves as a centerpiece. At over 10 minutes, it’s both the longest and takes the most time to develop. It begins with that peculiar noise that seems to show up everywhere from the beginning of Radiohead’s “The National Anthem” to the start of Floyd’s “Pigs” and even the first noise on Arcade Fire’s “Neon Bible” (honestly, if anybody knows what this noise is, help me out) and slow-rolls into full out Zuma-era Neil Young on painkillers. Deconstructed guitar plucks, scattered keys, and ominous tympanis pave way for two-note solos that recall Young at his most recklessly downtempo. Crunchy distortion takes over midway; Messy solos doused in overdrive and reverb create a subtly chaotic backdrop for smoother, more melodic noodling.  This sort of restrained chaos almost feels like a stoner-metal band gone country. A staccato crunch slowly permeates the strangely middle-eastern meets southern-rock guitar solos for a powerful ending.

From there on out, it’s a lot of the same. Many of these songs tend to stake out one place and tread water, never really moving anywhere different from where they started. There are few if any ornate breakdowns, abrupt time-changes, or really jarring moments at all. For an instrumental record, that’s kind of a big deal. Which begs the question, why go instrumental?

Though the songs are gorgeous, lush, and evocative, they tend to stick to the path well-trodden by the group’s associated acts. With Kozelek at their helm, and not just as producer, they could easily develop into full-fledged gems. It just doesn’t make much sense why these weren’t just fleshed out into Sun Kil Moon songs, why they were set apart from the main outfit and called something else. There’s so little that distinguishes these songs from their main set, you can’t help but feel that they’re simply missed opportunities for some of Kozelek’s poetry, even in their simplistic splendor. As instrumental tracks, some hold up very nicely, while others merely feel like short snippets of Sun Kil Moon backwash, which evidently isn’t so bad at all.