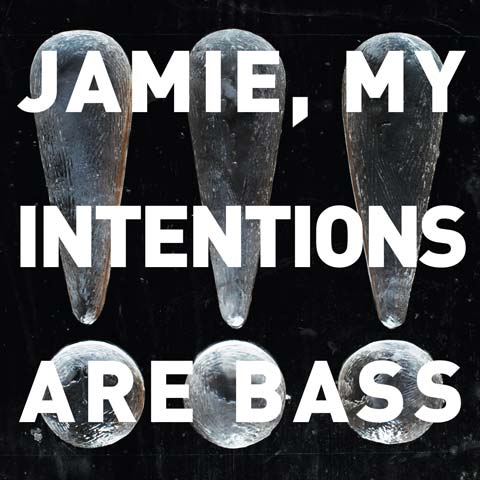 It has been a busy year for Sacramento dance-punkers !!!.  Strange Weather, Isn’t It?, their highly-anticipated follow-up to 2007’s smash Myth Takes, was greeted with a decidedly more mixed reception, with some fans and critics lamenting an apparently decreased emphasis on melody and a sleeker, less raucous style and production. Fellow Consequence of Sound staff writer Ryan Burleson declared that on Strange Weather, “instead of evolving their ability to write hooks, the band stayed put, crafting a record full of trademark grooves (at this point, they probably write them in their sleep) while thwarting any sense of surprise.” Currently in the middle of a world tour, !!! has another new release for 2010 in the form of a remix EP.

Curiously, the cleverly-named title track from Jamie, My Intentions Are Bass does not get the remix treatment. “Jamie” is the kind of five minute disco stomper one has come to expect from !!! over the years, but an irresistible chorus keeps it tantalizing. If any track from Strange Weather, Isn’t It? deserves two remixes, it is “The Hammer”, as it is one of !!!’s finest songs to date. On the Thomas Bullock remix of “The Hammer”, the song is taken down to an almost down-tempo level while retaining its swagger and blustering percussion. The Canyons give “The Hammer” a more drastic makeover, stripping away its signature intensity and percussive elements, increasing the electronics and adding some effects that bring to mind a Caribbean drums. It’s an admirable effort, but the end result is standard club fodder.

“The Most Certain Sure” also gets remixed twice on Jamie, My Intentions Are Bass. Liv Spencer takes what originally sounded like the sort of funky disco party anthem we wish had existed more in the 70’s and transforms it into deep house, while the remix from Bibio takes the song into experimental territory with undertones of Boards of Canada. Like most albums and EPs of its kind, Jamie, My Intentions Are Bass features some remixes that are surface-deep makeovers, while others are radical transformations, all to varying degrees of success.