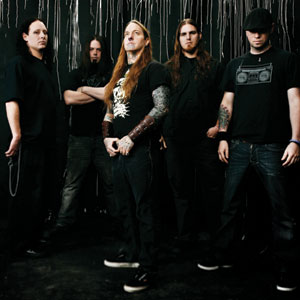 As part of the Roadrunner Records stable of artists, DevilDriver bring their own crushing brand of heavy metal to the masses. Frontman Dez Fafara has been a part of the RR club for some time, first joining as a member of Coal Chamber in the mid-’90s nu metal scene. But with DevilDriver, the music is much more intense and has gained many a loyal headbanging fan. Starting 2011 off right, the Santa Barbara-based quintet will be releasing their fifth album, Beast, keeping the title simple and to the point. In recent statements to the press, Fafara believes that this will be the band’s most extreme release to date. Rather fitting title then, if you ask me.

According to the press release, an official Beast tracklist has not been released, but DevilDriver fans can expect to see 11 or 12 songs with titles of confirmed tracks as follows: “Dead to Rights”, “Hardened”, “Bring The Fight (To The Floor)”, “Shitlist”, “Talons Out (Teeth Sharpened)”, “Blur”, “You Make Me Sick”, “Sacred Secrets”, “The Blame Game”,  “Coldblooded”, “Crowns of Creation”, and “Lend Myself to the Night”. We’ll update you with more track information as it comes.

Beast is scheduled for release on February 22nd on Roadrunner Records.