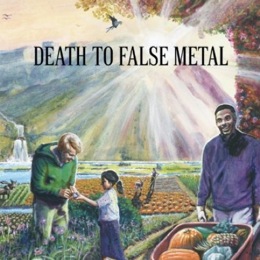 Only weeks after releasing their eighth studio album, Hurley, Weezer return with a new collection of tracks, this time an ensemble of reworked rarities. Originally titled Odds & Ends (no doubt a reference to The Who), the band opted for the more tongue-in-cheek moniker, Death to False Metal. Unlike Rivers Cuomo’s successful Alone releases, however, this effort sounds and feels like an actual album. But that’s the point, at least according to Cuomo, who says, “Together, they are the album that should logically follow Hurley.” Makes sense. Given that most of these tracks were pulled for not sounding Weezer enough, that argument means absolutely zilch at this point in their career, where their albums have included tracks like the rap-rock catastrophe “Can’t Stop Partying” or the Uncle Cracker-esque “Thought I Knew”. Yikes.

So, what do we have here? Let’s just say, Odds & Ends would have been a more telling title. It’s sort of a mess. There are tons of modern rock riffage, courtesy of Brian Bell, and some of the lyrics might make you a bit squeamish (e.g. “Blowin’ My Stack”). However, you’re used to that by now, especially if you stuck around after hearing “We Are All on Drugs”. But don’t get too hung up on the details. These are songs that didn’t make the cut, after all. Some are quite delectable, though. Maladroit-era tune “I Don’t Want Your Loving” should soothe some of the more recent wounds, working off some chummy distortion and a traditional melody that makes you wonder why you haven’t heard the song yet. Cuomo’s oddball “Let’s Write a Sawng” project he spearheaded via YouTube comes to fruition in “Turning Up the Radio”, resulting in a dynamite track that recalls Thin Lizzy. It’s catchy and will likely swim in your playlist for awhile.

If “Losing My Mind” sounds familiar, you know your Weezer history. This one originally dates back to 1999, when Cuomo started tracking songs for their second self-titled release, 2001’s Weezer (Green Album). Albeit slow, the tune works, even if it starts to feel a bit preachy and those violins could have been excised. What most fans will replay again and again, however, will be “Trampoline”. It’s raw, it’s bewildering, and Cuomo sounds enthused. Again, as is the case with plenty of the effort’s songs here, the reworked overdubs sort of jab at you. The additional harmonies, most specifically, stick out like a sore thumb. Still, recorded during the group’s extended hiatus post-Pinkerton, plenty of folks should enjoy it for its throwback features.

But, then there’s the ugly. Aforementioned tune “Blowin’ My Stack” gets to be the album’s stupid song, following a recent tradition that started with “We Are All on Drugs” and continues today, most recently with “Where’s My Sex?”. Sure, “…Stack” sounds like a Weezer song, but the lyrics could have been written by an angsty sixth grader. At one point Cuomo says, “I’m pissed off, because no one cares/They walk on by me, like I ain’t even there.” Right. Does it surprise you this one’s from Make Believe? Then there’s the triple medley punch of recent tracks “Odd Couple”, “Auto Pilot”, and an incredibly grating cover of Toni Braxton’s “Unbreak My Heart”. The first feels too disconnected, the second you’ll want to skip immediately, and the last might seem funny but it just comes off as unnecessary. It’s sort of like when the guys threw on a cover of The Band (“The Weight”) as an iTunes exclusive a few years back. Neat, but at the end of the day, who cares?

Everyone knows a wealth of material often goes unused for a reason. Ironically, that has been Weezer’s worst mistake as of late. Take their 2008 self-titled album into consideration. Songs “King”, “Pig”, “The Spider”, and “Miss Sweeney” are all exceptional songs, miles ahead over abominations like “Thought I Knew”, “Heart Songs”, “Cold Dark World”, or “Automatic”, and had they been on the record, it probably would have been the band’s strongest release in recent memory. But they didn’t. Since 2005’s Make Believe, which in hindsight received far more flak than necessary (“Perfect Situation” and “Hold Me” stand as some of the band’s best tunes), fans have scratched their heads and wondered, “How the fuck did this make it on here?” Whether it be Cuomo’s need to embrace his nerdy sensibilities or the band’s efforts to branch out in sound, one thing’s clear: They’re doing something wrong.

In the past five years, this band has come so close to creating a solid record, but they’ve always missed the mark. Death to False Metal continues that tradition, unfortunately. Even as a collection of rarities, it offers no real insight to what’s going on in this group. They remain confused, musically and lyrically. How these guys can come up with an epic like “The Angel and the One” and churn out something so forgettable as “Auto Pilot” just doesn’t make sense. However, it’s a bit unfair to make these statements based on this effort. After all, it’s basically a hodgepodge of bastard tracks, only seeing the light of day because fans feel the need for more and more. (Yes, Weezer consciously released this on their own behalf, but don’t deny for a second that you’re always insisting upon hearing everything. We all do.) The thing is, one would have hoped to gather some insight by hearing the misfires. That’s not the case here it seems. Oh well. There’s always Hurley, which gets better and better with each listen. So there’s that.