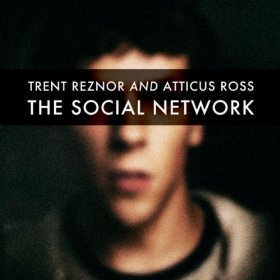 Initially, the thought of Trent Reznor and Atticus Ross scoring a film about Facebook is a bit unsettling, if not simply confusing. But, then again, so is the thought of a film about Facebook to begin with. Reznor even declined the initial invitation, probably feeling the same sort of strange ambivalence we all had towards the movie when we first heard about it: “Why?” and even more, “Why now?” In his case, there was also an additional question: “Why me?” The answer now seems pretty clear.

After taking in both as one unified entity, and separately, as complimentary forces, the pairing feels more like a love story written in code than a money-grubbing, name-dropping studio ploy. Because Fincher’s The Social Network is not merely about Facebook the website. It is about the site and cultural phenomenon’s tragic hero: a man (or boy, if you please) too smart for his own good, whose extreme intelligence, obsession with computer technology, and undeniable character flaws alienate him from what he wants most in the world: successful human relationships. What he makes of his personal situation comes with great success, but not without undeniable (both intentional and unintentional) sacrifice.

Since the late 80’s, Michael Trent Reznor has been crafting gorgeously abrasive records of self-alienation, self-pity, and unbearable want. Time and time again, he has admitted to his own personal flaws, cursed the outside world, and begged that same world for unconditional love, all under a dark, rasping, digitally manipulated mask. He has taken large leaves of absence and struggled with depression and substance abuse. But, in the process, he’s also become one of the most influential artists of the past two decades and arguably of all time, inventing his own strange amalgamation of industrial metal, pop-rock, and alternative. He’s sort of one of alternative rock’s own tragic heroes.

But even without Reznor’s loosely parallel rise to fame, the sounds he and Atticus Ross (whom Reznor has worked with since 2005’s With Teeth) have crafted for this film’s soundtrack do a superb job of complimenting the film’s computer-age anxiety.  This is a dark, disquieting, eerily shot film about a one-man digital revolution. Most of its images are intense close-ups with high focus, setting Eisenberg’s Zuckerberg and those he interacts with apart from the otherwise blurred, cold, snow-covered outside world. The cinematography in and of itself creates eerie tension. Add in some scathing bass tones, schizoid electronic blips, and outside-the club drum beats, and we have some serious bleak.

Not so different from 2008’s Nine Inch Nails/Ross instrumental collaboration Ghosts I-IV, the record is a lengthy set of industrial, post, and alternative-rock infused ambient electronic music. Think Reznor, Fripp & Eno, Wendy Carlos, and Steve Reich mingling at a Halloween party on painkillers. These selections range from deranged, coked out club-bangers to piano ambient/drone. Opener “Hand Covers Bruise” is an example of the latter, which finds itself in the lengthy opening credits of the film, following Zuckerberg as he makes his way home after being dumped, through the vast snow-covered Harvard maze to the solitude of his desk, where he begins what will ultimately pave way for…well you know. It is a brooding, immensely dark piece, fit with sparse, downtempo piano keys atop scratching oscillation and liquid bass. This leads way into the video game discothÃ¨que raver “In Motion”; its chromatic blips and beeps accompany a steady beat with some synthy tension bubbling underneath. “A Familiar Taste” is as Nine Inch Nails as it gets: a squeaky, bass coughing, beat heavy rocker with up-tempo electric guitar and pounding, mechanized drums. It’s a straightforward NIN instrumental, sitting shakily on a slow-moving cart with broken wheels that won’t shut up. As we begin to notice the squeaks, they seem to get louder, like a schizophrenic voice from which we cannot hide, scratching at our ears. Every track here is diseased with itching clutter.

There’s this sort of genuine beauty in every track (some minor piano notes, an ominous, but relatively brighter synth), but a scathing, tension-heavy undercurrent seems to want to bubble up over its brim. It’s an album with distinct but cohesive variations on gorgeous electronic minimalism infected by a buzzing, a squeaking, or a scratching which carries an agonizing sense of dread and restlessness. Whether the song is upbeat dance-rock accompanying a party scene, or teeth grinding slowcore ambient beside Zuckerburg staring at a computer screen, these tracks convey the same message. They mimic the anxious ambivalence that Sorkin’s script and Fincher’s direction convey so similarly. Underneath it all, something is wrong, even if we can’t see it, and if we start to take notice of any of the problems, the disease magnifies itself and breaks through to the foreground. “In the Hall of the Mountain King” is a notable standout for its ability to try this method on the centuries-old orchestral piece. The outcome is effective, but seems slightly out of place, as it does even in the motion picture.

But, “3:14 Every Night” takes these disquieting background sounds and places them up front, to a stirring effect. The thing sounds like rats running through the reverberated walls of a Brian Eno record, buzzing, gnawing, and chewing their way through to a horrific beast. And that’s what this record is: a pretty frightening collection of ominous, yet gorgeous minimalism consistently pervaded by a cancer of nightmarish noises you can’t help but take pleasure in watching spread. By the end, the thing is black to the core, seeping with squealing electric guitar, skittish drums, stinging piano, metallic clicking, cacophonous buzzing, and weasely scraping. In other words, Trent Reznor and Atticus Ross doing exactly what was asked of them.  Not to soundtrack Facebook, but to further convey the horrific angst and turmoil that accompanied its creator leading up to, during, and after the “invention” of an entirely new cultural practice.