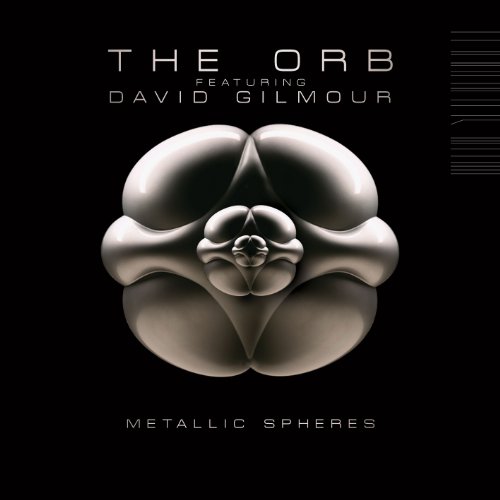 Extended instrumentals are not really my area, but when you see David Gilmour‘s name on the docket, rationality tends to evaporate pretty fast. I jumped on this hastily, but the fact is that breaking down Metallic Spheres in the traditional sense is damn near impossible without some technical knowledge of musical movements. The only logical way to pursue this now is a bit of a fire-walk — trusting the music at face value, succumbing to it together, you and I, as listeners.

Metallic Spheres is a two-part grand design by none other than chill-out electronic music experts The Orb. Sonically, it is extraordinarily muted compared to other works in The Orb canon — especially Bicycles & Tricycles, which in and of itself was a sleight of hand toward rap-flavored dub and trip-hop. Whenever genres like chill-out or house or industrial get brought up, I find it hard to nail down any given standard, because either the experimentation is so vast or the cast so diverse, much akin to modern art.

Here is chill-out to its roots: atmospheric, at times complex, but mostly allowing lots of room for personal interpretation, like classical music. I am grateful I don’t analyze this style to death, as I would be like any other schmuck who tried to read too deeply into the most basic of notions and build myself up on theoretical pomposity. The Orb can be scoring Space Odyssey in its own mind one minute, creating a world of its own in the next, and making it look natural. This is part of the charm, and adds to Metallic Spheres‘ overall tone: though split into two halves, the entirety of this record seems to build upon itself non-stop, even during the down notes.

Metallic Spheres is not necessarily for everyone who is devout toward The Orb, as it does require some patience to sit through. But this also allows Metallic Spheres to perform a sort of hypnosis on the listener. The perspective I received during the A-to-B listen was one of positivity in the chilling nature of modern society, finding a praise chorus in the monotony of technological hums. Unlike a recent film scoring project by Trent Reznor and company, the idea here is not embracing the clicks and buzzes for personal (and entertaining) gain or heightening a predisposed mood, but to allow the user alone to develop their own take psychologically.

For the uninitiated, the theme is unclear even after gazing at the subtitles for each piece, but the mood both separate and combined never wanes beyond the audio equivalent of cold steel and futurist visions. At each full listen, the ears pick up something new in the layers, which is admirable because The Orb has a way of blending it all so seamlessly — until Gilmour gets stacked in. The former Pink Floyd guitarist is no stranger to epic proportions, having been an integral gear in one of progressive rock’s most iconic bands for decades; Gilmour shines every chance he’s given, taking the role of jam master and morphing into a mild aesthetic, complementing every dub and subtlety throughout Metallic Spheres.

Unfortunately, this leads to a misnomer: Gilmour did not plot all of this out alongside The Orb. He is a guest performer that was melded into the otherwise stirring melodies. Metallic Spheres utilizes the little bit of foreground allotted to Gilmour to accent the most important moods, but do not pick up this album expecting a Gilmour solo project. I think a lot of people will buy or download this release with the notion of a Floyd-flavored pop record, and this is misleading; Metallic Spheres is solely an Orb proceeding, and Gilmour, the guest speaker. Gilmour’s guitar is evidently noticeable and, as always, hard to forget, but the beauty lies in his instrumental nuances, not his star status (though that might be what drives most sales). This is good news because The Orb is selling you on its own merit, but bad news for anyone who got confused at first glance.

Metallic Spheres is chill-out to a “t”. Nothing fancy, and barring the subtext given on the CD, open to anything you could possibly imagine. This album is relaxing, meditative; occasionally chaotic, but tamed in a matter of moments. This is stream of consciousness in a steel bearing, bite-sized and fun to let roll about on its own.