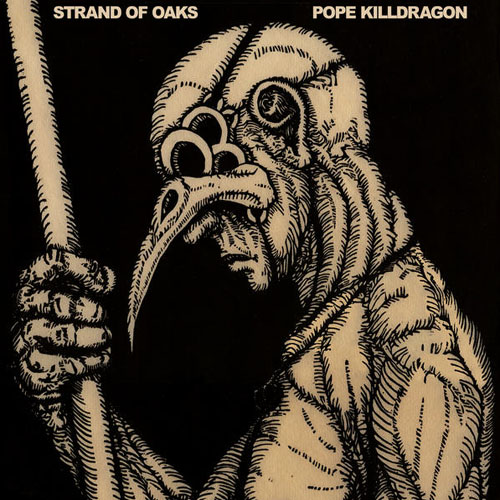 Tim Showalter’s first album under the Strand of Oaks moniker, Leave Ruin, became instantaneously synonymous with its cinematic back-story. Indie-legend has it that Showalter’s fiancée broke up with him just after he had returned to his home one night to find it burned to the ground. He then spent the next few months writing the record’s material on an acoustic guitar in between nights asleep on Philadelphia park benches.

Since then, he’s made it clear that he’d like to separate himself from that particularly remarkable anecdote. He’s currently married and has apparently recovered from such distress. But if there were a specific catalyst for the songs that make up his latest album, Pope Killdragon, it would be difficult to pin down to one similarly traumatic experience. Rather, this record feels as if Showalter began drunkenly flipping through his television one night. In this hypothetical stupor, he watched conspiracy theory documentaries on Kennedy’s assassination, public access communal prayer shows, Saturday Night Live Season 1 reruns, and history channel programs about knighthood. New Order’s Low-Life also figures in there somewhere. Wait, what? Um, yeah.

But this lyrical madness makes perfect sense when Showalter tells it to us. Something about the entire record feels majestic, even a little holy. Like the stirring narrative power found on dark folk albums such as I See A Darkness and For Emma, Forever Ago, Showalter slowly but surely leads us to believe that he holds some impeccable self-understanding and knowledge of the universe that we don’t yet possess. He doesn’t do this with condescension either, but with a sort of natural prophetic swagger. He’s telling us the story of the world through his own twisted dreams of how it should be.

This is an album where the winner for strangest song subject is equally split between a tune that revisits Kennedy’s assassination and in which the speaker knows exactly how it occurred based on a story called “Killdragon” written by the president’s bastard Irish-German son (“Sterling”), one in which Dan Akroyd takes blame for John Bellushi’s overdose and plots revenge against Bellushi’s drug dealer (“Daniel’s Blues”), and one in which the speaker begs for the Virgin Mary’s hand in marriage so that he can play and do “child-like things” with Jesus Christ (“Killdragon”).

Opener “West River” is an electrified folk take on New Order’s “Elegia”; a guitar-led instrumental track gleaming with tinny synth and reverb-laden drums. It leads us beautifully into a record of slow-building ballads. On “Sterling”, Showalter slow picks his way to a screeching climax, repeatedly belting out “I saw him coming!” over screeching e-bow and noised out strums. In between, he finds room for lyrics that will linger long after the record’s conclusion: “This year I’m gonna work on stability/This year I’m gonna try to keep my friends close to me/And I hope that one day they have half as much as my grandpa’s integrity.”  It’s all sung with a gorgeously catchy melody that doesn’t depart from the  song’s darkness.”Alex Kona” sounds like a Cave-ian Murder Ballad. “Last to Swim” finds Showalter at his most keenly desperate, cooing quietly before crying out over pounding tympanis and ethereal string synths at the top of his lungs: “When all mosquitos/Are lying in my window/And my kids don’t know how to read/I’m gonna write you a letter/Saying all these cities’ problems are/Coming after me/And when the Wyoming valley caves in/I’ll be the first in the river/And the last to swim.” Earlier lyrics recur in the album’s closer, “Pope Killdragon”, tying the singular work together with elegant self-awareness.

In the end, Showalter leaves us with a record that feels strangely fresh in nearly every sense. Both lyrically and musically, it breaks new ground instead of sticking to the themes and instrumentation so often utilized by depressed, bearded folkies. Showalter does dark and brooding his own way, and it yields some bizarrely effective results.