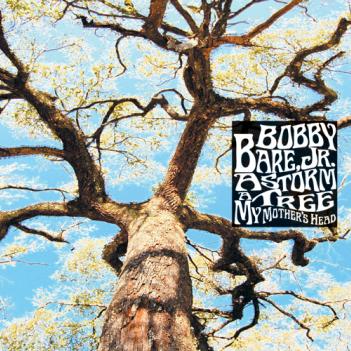 Fortunately, most music industry observers have over the last few years come to realize that Nashville isn’t simply a honky-tonkin’, Jesus praisin’ cocoon of Southern-fried conservatism. This is a good thing, of course, as the shift not only infers that Music City is diverse — which, it most certainly is — but, that the city’s artists who don’t necessarily bow down to the CMT establishment or the Good Book receive the attention they deserve. One of these artists, in particular, has been overlooked for far too long: Bobby Bare, Jr., the son of vintage country artist, Bobby Bare. For almost a decade, Bare Jr. (not to be confused with the roots band Bare Jr., of which he was a part) has released a stream of rewarding solo material that oscillates between alt country and balls-y Southern rock, in addition to touring with luminaries like My Morning Jacket, The Walkmen, The Decemberists, and Bob Dylan (among others). He’s earned the respect of giants, to be sure, but has nevertheless evaded the popular conscious, a trend that will likely sustain itself with the advent of his newest record, despite how great it is. Indeed, A Storm – A Tree – My Mother’s Head is a richly textured, vibrant collection of songs that defy simple classification, much like the city and songwriter they came from.

Always flanked by a variety of talented minds, Bare Jr. was this time joined by My Morning Jacket’s Carl Broemel (steel guitar), Patrick Hallahan (drums), and Tom Blankenship (bass), and the record was co-produced by songsmith David Vandervelde. The group’s obvious cohesion feels natural and unhindered for the majority of the record, most prominently in the collection’s more hard-driving pieces, of which there is no shortage. Songs like “Your Goat is on Fire”, “Lost in the Puzzle”, “The Sky is the Ground”, and “Summer of ’93” rip with a distorted exuberance that recalls Matthew Sweet or Dinosaur Jr., a boisterous vibe that’s interspersed tastefully among the record’s more relaxed, country-inflected material.

In that vein, “Don’t Go to Chattanooga”, “One of Us Has to Go”, and “A Storm – A Tree – My Mother’s Head” (an autobiographical tale about his mother’s near-death experience at the hands of some nasty weather) are the most traditional songs on the album, though they’re a far cry from what one would consider the “Nashville sound.” Broemel’s pedal steel playing, in particular, gets drenched in reverb at different points, lending one of the most recognizable instruments in country music a haunted, progressive quality that re-imagines what’s possible in the genre. Similarly, “Liz Taylor’s Lipstick Gun” is largely based on an electronic palette that could presage some next wave of Nashville production, undoubtedly to the chagrin of the city’s more conservative factions.

Notoriously a gregarious, fun-loving individual, Bare Jr.’s lyrics are whimsical without being overwrought, a theme that blankets his riffs on love, loss, and revelry in a way that is consistently disarming. On “One of Us Has to Go”, we’re naturally fearful for the fractured life of the song’s protagonist, but you can’t help but grin when Bare Jr. speaks the sound of a gun discharging, nonetheless. “Rock and Roll Halloween” takes us on a rollicking, jangly ride through a typically odd night in Atlanta, making humorous observations at the same time he’s issuing the casually ominous warning that “[he’s] seen things that [he] hopes you never, ever have to see.” (Truth is, I actually wouldn’t mind seeing “Elvis make out with Jesus in a limousine,” but that’s neither here nor there). On a more serious note, this tension plays out superbly in the penultimate, “But I Do”, as the frustrating dichotomy of head versus heart is explored to the tune of wide-open, rock-n-roll swagger. Written with Bare Sr., the song masterfully reminds us how it’s often the simplest lines that deliver the most profound impact. Yes, as the album closes with a raucous instrumental eruption that suggests anything but precious, heart-on-the-sleeve emotions as a foundation, it’s difficult not to be fixated on the line, “I don’t wanna love you, but I do” from the song prior, a competing feeling that precisely embodies Bare Jr.’s time-tested musical perspectives.

If I have one complaint, it’s that songs like “Jesus Sandals” and, ultimately, “Rock and Roll Halloween”, lend the record a kitschy quality that otherwise is nowhere to be found. Elsewhere, Bare Jr. manages to be playful without distracting from its overarching sincerity, a needle that’s been thread carefully and imaginatively throughout his oft overlooked career.