Avey Tare – Down There 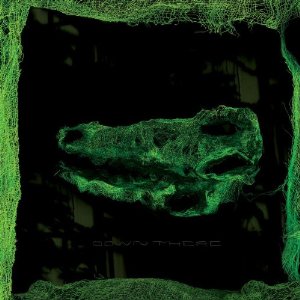 I’m pretty sure that I was in a tiny minority being more excited about Avey Tare’s solo album over Panda Bear’s when-will-it-be-released Tomboy. Not that I’m not excited about Tomboy, or that you have to choose one Animal Collective member’s solo career over the others (heck, I like Deakin’s stuff pretty well). Rather than pushing a competition, this release just reinforces the idea that these four talents can release music under whatever combination of names they want, and it’ll be solid stuff.

After a scrambled, title-dropping intro, “Laughing Hieroglyphic” bubbles in a bassy swamp, demonstrating a sonic palate that dominates the rest of the album; Tare (aka Dave Portner) and producer Deakin (aka Josh Dibb) employ a lot of sub-bass, a lot of reverb. The rest of the track relies on headphone-circling melodica, high-frequency synth drumming, and that sub-bass that’s colored so much recent Animal Collective music. The track is reminiscent, oddly, of Water Curses, which actually sounds like it could be an apt title here. Portner’s vocals are pained, emotional, some of his best. There’s a brief distorted dialogue sample (think intro to “Who Could Win A Rabbit”) before “3 Umbrellas” tilts into view through the gloom. It’s a highly rhythmic tune, with wordless backing vocals. It could be a Panda Bear track if it weren’t for the oh-so-Portner vocal delivery, with its rapid-fire phrase releases.

Throughout the effort, it feels necessary to insist on listening to this with headphones. There’s another strange dialogue sample before Portner whispers the word “rockets” and then, zoom, we’re away, into a sort of weirdo-club jam beat for “Oliver Twist”. The ghostly, bass double that shadows him throughout the first verse (and then a scratchy, high-pitched one later) is something almost Knife-like – ethereal, odd, compelling. “Shouldn’t I be content with what I got?” Portner moans, a particularly touching little moment of doubt considering his newfound ultra-success.

“Glass Bottom Boat” is an excellent little interlude, a quick peek into the depths of what we’re floating over, the pain underneath the veneer. It’s also a reminder of Portner’s collaborations with former roommate Eric Copeland (of Black Dice), the levels of rhythm, sampling, sounds growing and changing. That said, “Ghost Books” follows on a pitch-shifted rhythmic sample that’s even more evocative of Black Dice. The bass slinks and slides through both headphones intensely, the controlled chaos pulsing and lilting.

The whispered vocals, heavily reverbed piano, and vocal samples of “Cemetaries” are damn near heartbreaking. I’m tempted to slow down/speed up certain pieces of the track to find out what the distorted vocal samples are saying, to break everything down further into the mess. “Gravestones are covered in time,” Portner moans, the sense of loss drenching the track. “Write a little more into the freeform… I don’t want to” Portner adds in “Heads Hammock”, instead insisting on airing his feelings, and thank god for that. To that end, “Heather in the Hospital” follows, focusing on his sister’s fight with cancer. The urgent, vague, anxious lyrics about hospitals are a kick to the gut, the simple, insistent rhythm pulsing these pains into your head.

Which leaves us with “Lucky 1”, the lead single that everyone tasted prior to the album’s release. Before listening to the rest of the album, it didn’t sound this anxious. The pulsing bass and synth are fun, sure, but his vocals are mournful, wailing even. The synths will be tough to forget, but his full, commanding vocal performance will be even tougher. This all shows how complete, how integral the album-as-a-whole concept is here. When the track’s mood can shift on a dime based on hearing the effort as a whole, that’s something really special.

Some will complain that this isn’t going to spawn any “My Girls” style breakout singles/dance-alongs. That’s just missing the point entirely. This is an album of great depth, of serious power, one that conveys so much emotion and yet contains so many inventive and compelling musical moments. This isn’t Tare working off of Merriweather Post Pavilion’s success or trying to emulate it. He’s drawing from past strengths (Water Curses and Feels particularly, even Strawberry Jam) and producing something new, something unique.