Menomena, Suckers, and Tu Fawning show off in Chicago (9/25) 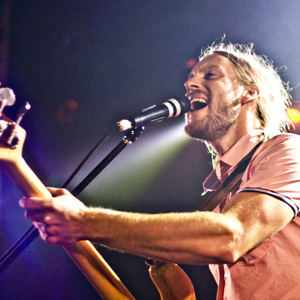 Everyone who walked onto The Metro’s stage Saturday night was a show-off. From the openers Tu Fawning and the rowdy and lovable Suckers, to, of course, Menomena, each band member displayed an array of musical flex. With the willing exception of Menomena’s Dany Seim on drums, everyone played at least two, sometimes up to four different instruments to varying degrees of ridiculousness. This growing trend in modern indie music is such a pleasure to watch on stage, and it’s almost becoming a prerequisite for new bands who want to pioneer the next sounds of pop-rock without having to split the band’s cut of the show between eight band members. So, if you play bass, you better own a clarinet and help out on the melodica, cause times are tight — we’re in an economic recession, after all.

Tu Fawning, a balanced male and female quartet from Portland, set the tone of the evening by opening with a song rich with blusey four part harmonies and synchronized tamborine hits amongst the band. This eked a smile out of me, and through their set, it stayed. With a marked aversion to a snare drum, tribal rhythms sometimes mixed with a shanty groove backboned their set, and four capable musicians played their thirty minutes well, culling cheers from the crowd after rousing numbers.Think: If Beach House met Prince Rama.

Since SXSW, Suckers have been playing second banana to Local Natives, Menomena, and soon Yeasayer. Perhaps because of this, these Brooklynites are real confident on stage, to the point of almost stealing the show. In a night where there were no real front men, Quinn Walker, bedecked in face paint and tribal bling, took to the task of  leading the charge of their even more tom-driven drum circle vibe, only this time underscored with, like, college frisbee sports. The ridiculousness of the multi-instrumentalist show came to a head during their set, when the bass player layed down a beat on his drum machine while also playing the bass at the same time. The alternation between the two was more funny looking than impressive, but I can’t knock the guy for his talent.

Their song “Roman Candles” opens with this carefree whistle, and right about then I got to wondering: Why haven’t Suckers been misappropriated by frat-boys yet?  The TKE’s grabbed ahold of Modest Mouse and MGMT and Edward Sharpe. Why not Suckers? Maybe they have and I don’t know it, but I feel like these guys deserve more than that. Their smart, fun, danceable show will grow, and soon, the eccentric Quinn will be able to stage-dive into a crowd no questions asked, as opposed to gingerly placing himself at the edge of the stage and trust-falling into a group now under duress to hold him up. However, that small moment of FAIL paled in comparison at how much their set was for the win.

After 30 min (!) of set-up, Menomena took the stage at 11:00. The opening chimes of “Tithe” rang out, and on walked the boys, poised at their stations, ready to recreate their meticulous works. From the balcony, I looked out over the floor of the Metro, and and when Siem’s drums kicked in, there was an almost unanimous collective head nod. I mentioned that that he’s the only person of the night who’s not also rocking a mouth harp or recorder or something, but that’s a good thing, because he pours all of his energy into his drum kit which is a joy to watch and hear.

As they then transitioned into “Taos”, one of the best songs of 2010, we finally had some true rock n roll in the place. Justin Harris’ bass was distorted, Brent Knopf’s dextrous piano skills were on display, and tour ringer Joe Haege’s guitar was unhinged and unrefined. This was a highlight of the night: their most accomplished song with the tempo kicked up a bit.

But, not all of Menomena’s songs packed the same punch as “Taos”. Which brings me to the draw back of this recession-proof rock that exists today: it’s just not as inviting as it should be. The connection from band to audience is eschewed for technical prowess of the band members. Maybe I’m just some kind of purists who likes a proto-rock show, but the lack of interaction between Menomena and the audience made it more of an “evening with” type of thing than a “show”. Depending on your leanings, this could put a negative spin on things, but luckily for the band, each of their songs are so intrinsically fascinating that I was just fine with being an outsider looking in at their performance

Whether it was sharp turns or smooth builds, odd time signatures or ominous moods, every song unfolded into some grand and specific story under the umbrella of whatever genre you’d like to ascribe to Menonena (I’m avoiding this). The specificity was aided by all three members sharing vocal duties which somehow displayed unity and individuality. Knopf on “Killemall” was sublime, Harris on “Queen Black Acid” was nice and chill, and Siem’s little baritone bit on “Dirty Cartoons” introduced one of the most powerful moments of the night.

Yeah, there were moments of indulgence. All of Mines‘ songs had much more of a spark live than songs from Friend & Foe, and encore closer “The Strongest Man In The World” off their debut album was a fun funk jam, but didn’t quite end the show with the energy that they started with. But during the final song, I looked down: unanimous head nods. Sure enough, Menomena connected.