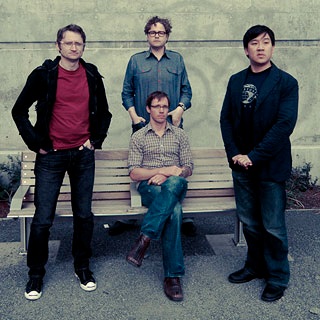 Moving past the goodbye memo that Harvey Danger posted on their MySpace a year ago, those of us who did care beyond “Flagpole Sitta” have often wondered what became of the new song our little college rock band cooked up for their farewell tour. Wonder no more, ladies and gents! Courtesy of John Goodmanson, who produced all three of Danger’s LPs, and Harvey Danger itself, we bring you “The Show Must Not Go On” — in studio!

This year will mark the 10th anniversary of sophomore slumping effort King James Version, one year after Harvey Danger’s final show, and the renewal of “Flagpole Sitta” as theme song for the eighth season of UK sitcom Peep Show. I will not hoist this up as the second coming because it is not anything close. I will not posture this song on a pedestal, but it is nice to finally see something coming of this lone track that cropped up during Harvey Danger’s goodbye.

And as fittingly as ever, the song in question posits varying sides of a break-up. How appropriate, yes? Sonically, it keys up on backwards atmospherics like we’re diving into a time portal before suddenly we get to a place where Harvey Danger is still around; a time before they were pegged as one-hit wonders or underrated indie rock. This song, the 2006 LP Little by Little…, and the b-sides collection Dead Sea Scrolls are all available for free download in the official Harvey Danger website. Check it out while you can, people, and if you are privy, make a donation to keep the site up for those who missed out on the festivities.

Check Out:
“The Show Must Not Go On”