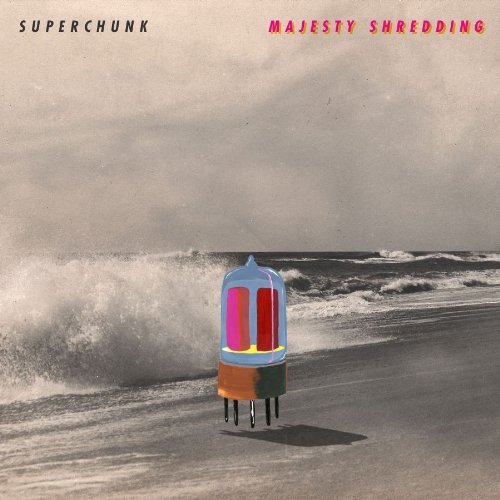 Here’s to Shutting Up, Superchunk’s last studio album before Majesty Shredding, began with “Late Century Dream”, a four-and-a-half-minute tune not quite a ballad, not quite a rocker, and not quite the beloved Superchunk of the ’90s. Thus progressed most of that subdued album, which heralded nine years of studio silence for the indie neo-punks. It’s not as though Mac McCaughan and company haven’t been musically busy elsewhere, but Superchunk nearly hit a point where word of a long-awaited, canonical, studio-primped release could sound like just cause for disappointment. Whatever, man.

Once ’Chunkily semi-sensical poppers like “My Gap Feels Weird” and “Rope Light” fill your headphones, any fears of Superchunk’s fading relevancy will evaporate along with the water so heavily referenced on the album. For a 21-year-old band that also happened to give birth to that cool leather-jacketed biker uncle of all indie record labels, Merge, Superchunk has dropped a record that sounds remarkably youthful. McCaughan isn’t expounding upon cosmic themes here. His voice still cuts through “oh yeahs,” feeling the sun on his face and lines like “any way you move, you rattle like loose change in your own shoes” on the charmingly simple “Rosemarie”. That’s all that Superchunk really needs.

In the face of multiple layers of melodious guitar work, strident vocals, and breezily tight production, it’s so hard to imagine McCaughan and co-founding bandmate Laura Balance are now in their forties. But maybe that’s what it takes for a band like theirs. Superchunk helped spearhead what eventually crystallized into the movement now called ’90s indie rock and is one of the few major bands to (a) make it through the aughts and to (b) do so without sacrificing the respect they deserve. Through either luck, or simply sheer Superchunk talent, they’ve continued their success into another decade, which isn’t just awesome for them. Majesty Shredding might work like this year’s Farm by Dinosaur Jr., metaphorically and literally sending good vibes to all of Superchunk’s early ’90s peers now back on the scene and flirting with notions of new LPs (Pavement, Pixies, Guided by Voices, etc).

According to its press release, Majesty Shredding came about out of the band’s desire for songs that would capture their live shows (they have been touring for much of the studio hiatus). Their back-to-early-day-basics approach, with McCaughan writing the songs and the rest of the band fleshing them out, is vintage Superchunk, and it shows. The songs on Majesty Shredding come from a band reenergized and ready to play new material, from “Digging for Something” (a power-poppy opening anthem devoted to asking “why?”) to “Everything at Once” (an aptly titled closer whose sounds build on the rest of the album before it).

On “Crossed Wires”, McCaughan begs his audience not to touch him, because he might electrocute them. Superchunk will touch you not because of their crossed wires, but because they’re always turned on. The last song on the album is titled “Everything at Once”, as if we needed anymore proof. These punks are here to stay.