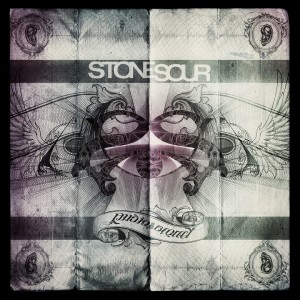 Stone Sour is a trick of the eye to me, as I always suspected it should be a one-off, Temple Of The Dog-style; it’s a product of Corey Taylor and Jim Root revisiting straight-up hard rock instead of malicious nu-metal. The eponymous debut came out in 2002, backed first by a somber and introspective Corey Taylor tune called “Bother” to distinguish it from his main squeeze Slipknot, then by much heavier and darker singles “Get Inside” and “Inhale”.

A DJ on 99X giving away some copies of Stone Sour immediately warned his audience that “Bother” was not indicative of this album’s overall tone, to expect a real metal album, and that is what we got, save for some rather vitriolic spoken word on closing track “Omega”. This was excellent marketing that covered all the bases and left few buyers disappointed – Stone Sour kicked some hard-rock ass and made a minor dent in its appropriate music scene.

Four years later, in walks sophomore release Come What(Ever) May, a more melodic and radio-geared record in its entirety, gripping the reins of  abrasive commentary on politics, social trends, and personal struggles (namely addiction). Its singles were more popular than those of Stone Sour; lyrically, this album was centralized on relating to the listeners instead of Taylor’s frantic, albeit awesome, rants.

Power single “Through Glass” spearheaded What(Ever) before launching into the gutbuster “30/30 150” and the stab at pop culture “Sillyworld”, thus giving us a taste of Stone Sour in the limelight via the previous formula. I wager that “Zzyzx Rd” is much better than “Through Glass” and parallels “Bother” far greater, and alas, I’m not their PR representative.

New album Audio Secrecy has a moderate starting point, beginning on the piano-driven titular track/intro before kicking into high gear on single #1, “Mission Statement”; whereas Stone Sour was rife with extremely verbose songwriting contradictory of its genre and What(Ever) was more trimmed down whilst savoring its angry roots, Audio Secrecy seems to place Taylor at running out of political steam on “Mission Statement”, a loud song with a lofty message that gets drowned out by redundancy and a good hook.

The cheekily-titled “Digital (Did You Tell)” and the ’80s metal-tinged “Say You’ll Haunt Me” or “Miracles” sound like something Evanescence would write for KoRn (cue the KoRn: Unplugged cracks, please, I beg you); “Dying” and “Let’s Be Honest” put Taylor in the spotlight again as both a jilted lover and a guy trying to sing more often instead of scream, which in reality should be good news, except that the songs are just as dull as can be. It feels as if Stone Sour is taking every bit of the last decade of modern rock, tying in some pseudo-Taylor/Root cohesion, and selling it to a mass collective who may or may not have long forgotten “Through Glass” by now.

Positively speaking, “Pieces” is tolerable as a semi-clone of “Inhale”. “The Bitter End” is by far the heaviest and best track on Audio Secrecy overall, and in a close second are the finale tracks, two – count ’em two – acoustic-based tracks titled “Imperfect” and “Threadbare”. These four songs plus “Mission Statement” are proof that the band is evolving, and the rest is simply evolution churning out puffs of smoke it made burning off the excess. Some might call me a purist for harping on Stone Sour’s obvious turn from hard rock to radio rock, from visceral rage to audible narcissism, and they might be partially correct.

Here’s the problem I’m seeing: Corey Taylor should have gone fully solo after Stone Sour’s debut, recorded both What(Ever) and Secrecy in his own signature way, and gone the way he has anyhow minus bringing down Root and company. Stone Sour should have been a one-off, a single solitary release dedicated to a bond between friends and a spur of unique hard material that didn’t gel with Slipknot’s more unadulterated brutality. Taylor, I suspect, is doing phenomenally well in the creativity department, but he’s toying with the entire spectrum of fans, both old and new, by dragging Stone Sour along into toss-away territory. Case in point? Some of Stone Sour’s best material has been either redoing earlier work or riding Taylor’s acoustic coattails.

Stone Sour’s Audio Secrecy follows the four-year quiet period, during which time Slipknot did its thing before the loss of its bassist, the late Paul Gray. The Taylor/Root-led side-project has since become a radio staple; strangely enough, Slipknot has managed its own share of singles in recent years, leading one to think Stone Sour’s modern rock influence has boiled over into its mothership, but I digress.

Audio Secrecy feels like Stone Sour trying to re-invent themselves to reach a wider audience in the most sincere way possible (“Hesitate”) while at the same time dropping the saturation of screams and chugging metal edge (“The Bitter End”) in favor of solos, swan song vocals (“Imperfect”, “Miracles”), and less weight on vague metaphor (“Mission Statement”).

Unfortunately for Stone Sour, this album only further cements my frustration as to why such a side project needed to continue (though arguably, about half of What(Ever) did sound fucking awesome). Maybe it could have been carved into a handy EP to chuck at our government and our materialistic nation instead of now harboring Secrecy, the neutered and wishful survivalist of Stone Sour’s starving kingdom.

Bright side? The Audio Secrecy album art isn’t half bad.