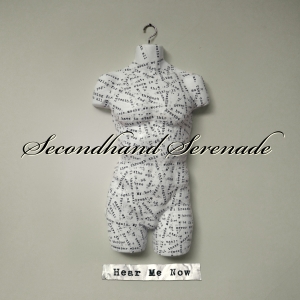 Secondhand Serenade is not so much a unique beast as it is a sound tweaked to suit a demographic shared with All-American Rejects, Owl City, or the like; a Dashboard Confessional minus its early-on pretension, if I may.

John Vesely, the one-man brainchild of Secondhand Serenade, is a remarkable optimist with a “heart on his sleeve” mentality and a timidity toward the production table, but what he holds in charisma he lacks in depth.

Hear Me Now is Vesely’s third album committed to CD under his Serenade banner, and it is near-fully produced by Aaron Johnson (known best for his work with The Fray). Antics and balladry ensue.

In noting prior the kind of sound one expects from this release, we get opening track “Distance”, and I immediately forget which of the above-named artists I am listening to. Off that good foot, we come to the first of three songs on Hear Me Now where Vesely earns some co-production credit.

“Something More” seems to have sopped up the more creative bits of whatever influence Danny Lohner had on Vesely during the A Twist In My Story sessions, because aside from a subtle Timbaland-esque drum track, we get to see Vesely really shine passionately on vocals, particularly toward the climax.

The next pair of alternations between Johnson and Vesely lends “Stay Away” and “You And I” respectively; on the one hand, we get an All-American Rejects copycat gliding into some drum clicks and all the ferocity of My Chemical Romance’s “I’m Not Okay (I Promise)” with a sedated Gerard Way in the director’s chair, whereas “You And I” is Owl City diagnosed with depression and prescribed a motley blend of modern pop.

This is me refraining from skipping back to a song wherein Timbaland being subtle sounds more promising. Where’s One Republic when you need them? There was talk at one point that Vesely was wanting this album to be more upbeat than his previous work, so where might have this bombast disappeared to during recording? Did it fall to the cutting room floor? Did Vesely cull together a kick-ass EP’s worth of personal asides we can cheer on as the second coming of Sean Nelson? Doubtful.

Vesely’s hopefulness is shining through as saccharin as ever, but save for “Something More” and maybe “Only Hope”, nothing really strikes me as intense or even fully forced. Optimistic as the record might be, Hear Me Now, all and all, sounds like nothing new in Secondhand Serenade’s small canon and comes across a break-up record for mid-’00s. One is all for happy pop music, but I would rather listen to Jukebox The Ghost.

Is it my ignorance or my failure to grasp the power of Vesely’s enthusiasm? I feel that if he self-produces his next release in its entirety, we could see some real blooming in the future, but this plain and simple radio fodder is not Secondhand Serenade’s full potential. I thoroughly believe Hear Me Now is lacking; the majority of Johnson-produced material sounds like an enabler for Vesely to remain bound in pop music “splendor.” Vesely needs someone that can groove like him, further easing him into production play more often, letting him start getting his whole body wet instead of splish-splashing about in the kiddie pool.

Meanwhile, did I sense some Yellowcard on “So Long” and “Nightmares”? Seriously? At least make the cribbing relevant, man.