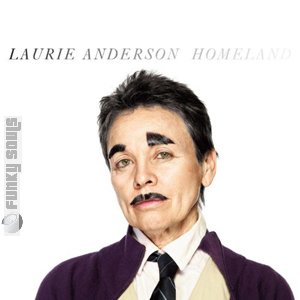 For her first album in nine years, experimental performing artist Laurie Anderson doesn’t deviate from the avant-garde sound that built her cult following in the first place. Her 40-year career as a performing artist can be described as unclassifiable, which defines and yet defies the odds of how a true artist can be labeled. Thus, it should be no surprise that on Homeland, Anderson’s eerie yet angelic voice grabs your attention along with the unorthodox sounds that support her words. Furthermore, she expands on the time-tested templates of her earlier material, albeit with more singing, violin playing, and unapologetic politics.

Homeland is produced by Anderson, her husband, the incomparable Lou Reed, and Roma Baran. It features appearances by New York-based artist Antony Hegarty, saxophonist John Zorn, and electronic musician Kieran Hebden of Four Tet. Having been in the woodwork since 2007, Homeland is an odd story altogether. Outside of being delayed countless times, perhaps the most interesting tidbit about this album is that instead of being recorded in several studio sessions, the material was compiled from three years of recorded improvisations, all culled from live shows.

The album begins with the nearly seven-minute nomadic tune, “Transitory Life”. Eerie, drawn-out violin entertains for nearly two minutes until Anderson eases into the track, which varies between song and spoken word. The background chants and light strings give this song a new age feel with a dark twist. It’s almost as if Anderson is trying to lull you to sleep with the strings while scaring the shit out of you with her lyrics. Altogether, it’s extremely haunting, though very well done.

Continuing with the themes of gloom and doom, “Only an Expert” takes a look at all that is befalling American society today. Don’t be fooled by the song’s funky dance beat; the tone of the song is serious, and the issues that Anderson is tackling reflect on what’s troubling our society today. The intro works off a dance beat that’s backed by Reed’s trademark guitar feedback and layers of angry lyrics repeated by Anderson: “Only an expert can deal with a problem/because half the problem is seeing the problem/Only an expert can deal with a problem/so if there’s no expert dealing with a problem/it’s really twice the problem.” She then calls out all the know-it-alls who are hurting and also systematically controlling society. Whether it’s Wall Street, fears of global warming, or people who think going on Oprah can repair their image, this is definitely the song with the most poignant message in these tough times.

If “Only an Expert” was an explicit way to criticize those who have hurt America, then the brooding “Another Day America” is the album’s conscience. Clocking in at 11 and a half minutes, this song best characterizes her male alter ego, Fenway Bergamot, who is questioning our country at this crucial point in its history. With vocals laid over strings and synths that are slowed down to the point of being nearly unrecognizable, the haunting tone of the song is the perfect microcosm of the album.

I’ve always been enamored by Laurie Anderson’s uncanny ability to fearlessly reinvent herself through her art. Though this may not be her most essential material, Homeland further proves that after all her time making art, Anderson still has a relevant voice to be taken seriously. Although this collection of songs doesn’t have much rhyme or reason to it, Homeland is consistently unafraid to take chances. But that sums up the artistry of Anderson: indefinable yet avant-garde music at its finest.