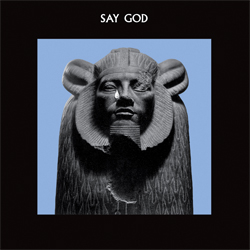 Daniel Higgs, former vocalist for both 80’s hardcore group Reptile House and post-hardcore mainstays Lungfish, isn’t your typical hardcore vocalist. And Higgs wasn’t truly your prototypical punk band leader – hardcore, post-, or otherwise. Though his stage antics (bleeding, eye-rolling, other general craziness) may have been pretty rock ‘n’ roll, his lyrics proved him to be as much a poet as a rocker, more Walt Whitman than Sid Vicious. Heck, his Dischord Records page goes so far as to call him the “Interdimensional Song-Seamstress and Corpse-Dancer of the Mystic Crags,” whatever that means. He’s taken up drones and banjo instead of guitars. Say God, Higgs’ new disc on Thrill Jockey, takes this mystical wanderer and drops him into the middle of an encyclopedia entry on religion, then lets him chew his way out.

The two discs that hold the 85 minutes worth of music here are full of questions, statements, and mantras. There’s something in his twisting, chattering, aching vocals that evoke other lone-crazy-wolf projects like Michael Gira’s and Carey Mercer’s solo outings. “This is a song about hoofprints on the ceiling of your mind,” Higgs crows. “It goes like this.” He refers to a song called “Hoofprints on the Ceiling of Your Mind”. A simple electronic drone bumps its head as a monk against a bible, over and over, a faraway tambourine matching each and every beat. Higgs, the door-to-door mind-expansion salesman admits that he “worked really hard on this song, harder than usual,” before trying to wrap his own mind around a whole lot of different things. He’s his own spiritual guide, hypnotizing listeners along with himself, drones and rambling coming together to entrance anyone willing to give the disc a try.

It’s not all maniacal preacher mumbo-jumbo, though. The outstanding “Song For Azariah” is a seven minute banjo drone of sorts, a single, basic banjo pattern with seemingly improvised flourishes twirled and spun outwards in a spiral of meditation. The piece is as vaguely Eastern as it is Appalachian, the banjo’s tone evoking the religious American South, while its mantra-like repetitions bring to mind ragas. It’s barely worth noting that TV On The Radio super-producer Dave Sitek recorded this mammoth, because it’s so close to a bedroom recording in so many other ways.

The title track is a 10 minute analysis of the role of religion in life, a repetition of Higgs saying “Say God” and then instructing when it’s worthwhile to do so; which is to say, whenever one finds wonder or importance in the world. In other words, nearly everywhere. The low, bassy rumble that empties into the mix nearly halfway through the song is a sort of noise instinct pummeler, a tone designed to strike at the core, to envelop, to overpower. There are higher tones, far off and slightly distorted, like a soundtrack to a NASA documentary as the space shuttle/your mind leaves the earth and looks back as things move further and further away. Later, on “A Message From the Beautiful”, his voice recaptures the nature of an instrument, returning to singing instead of spoken word. The drone is nearly the precise tone that opened the record, but his voice is its own counterpoint, crumpling and warbling skyward.

“Root and Bough” takes the same plot, but adds another sky-searching electronic-heavens drone into the middle. The seventeen minutes pass in earnest, like a serious discussion with a friend. The electronic melodica “Jewel of the East” is a brief interlude between sermons. The banjo comes back for “Christ Among Us”, an instrument that truly does Higgs more service than the basic electronic drones. They add to the religious quality without a hint of the New Age; deep, earthy tones working together with his global, epic vocals.

Say God isn’t easy listening; It’s probably not something you’ll play at a party, not something you’ll cue up for karaoke. It’s part spoken word, part chant, part drone, one hundred percent experiment. It’s a long listen. There’s philosophy, theology, humor, depth, meditation. It’s a world to get caught in, if you happen upon a moment where it works. But, just like any other religion, not every one will find inspiration here. It’s a sublimely personal effort, and one that requires a personal response.