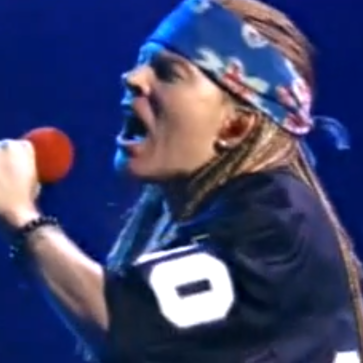 With the era of Chinese Democracy finally closing its chapter, with Jimmy Fallon hosting his own awesome late night show and bringing us some great musical lobotomies aplenty, in addition to my 26th birthday drawing near, I decided to give you a triple threat in six once-significant letters: M-T-V-V-M-A.

I am well aware of the downhill slope this old dog of a television channel has traversed since the early eighties; as a kid, one of my earliest memories of MTV revolves around the music videos for Bart Simpson’s “Deep, Deep Trouble” and “Do The Bartman”. I am familiar with the changes our musical world has undergone since coming fresh off of the new millennium train, the bursting of the dot-com bubbles and the direction of digital media altogether (does anyone even use 56k anymore?).

Nostalgia and hero worship of early Bart moments aside, MTV has a long and checkered history of flash-in-the-pan VJ personalities, Spring Break game show reinventions, and the rise and fall of TRL, but for a genuinely satisfying while, MTV played host to its more pop culture oriented Grammy pseudo-satire, the Video Music Awards. For all of its many current flaws, bombastic performance bombs, and insipid attempts to remain hip with the internet-savvy generation, this awards show once catered to every popular trend and genre in music regardless of outside influence.

In 2002, I graduated at the ripe age of 17, and a lot of shit happened at the VMAs: then-blooming TV personality Jimmy Fallon co-hosted with my then-stalking-target Kirsten Dunst; we mocked the garage band revival with a face-off between The Hives and The Vines; P-Diddy and Busta Rhymes brought out kangaroo hops, hype man/producer for hire Pharrell Williams, and Usher for an explosive show-off moment; The Boss sends a live feed in from Rose Center for the festivities; Eminem spits “Without Me” surrounded by giant, vengeful alphabet sculptures.

What am I forgetting? Oh, right! Guns N’ Roses.

Complete with Dizzy Reed, Buckethead, and a goth kid who apparently plays an instrument, Axl Rose and company get the ultimate fanboy intro from Fallon before bursting from the flames with a medley of “Welcome To The Jungle”, “Madagascar”, and “Paradise City”. Keep in mind that Rose was not feeling well during the set, yet still managed to choke out some acceptable vocals and really react off of the crowd; also, this performance comes a good six years before we would actually receive the record featuring “Madagascar”, our redheaded Gn’R stepchild Chinese Democracy.

Why is this important, you ask? It comes as a stifling reminder of how powerful Axl Rose can be. During a post-show interview with MTV veteran Kurt Loder, Rose slyly avoids dropping any specifics on the Democracy release date, but he admits to being legitimately challenged by recreating what was once one of the biggest bands in the world with entirely new staff. All of that on the plate, a pending tour plagued with cancellations, an illness, and this son of a bitch just did it anyway — and everyone ate it up. Granted, there are issues that posture as an omen of the VMA absurdity to come in the future, but is it telling that this was the last VMA show I can remember in its entirety? I think so, and more for good reasons than bad.

Does it excuse the constant delays on Democracy? Not entirely, no, but it gives some small insight to the longtime fans. Much like Billy Corgan, though we can bitch about the two and their random gimmicks to stay relevant (need I remind you of the “Bullet With Butterfly Wings” rap commercial?), we can also imagine the inherent difficulties they face in trying to save their respective struggling empires. Rose’s and Pumpkins alike, this is no easy undertaking.

With that said, this 2002 Gn’R performance was a real treat for everyone watching the broadcast, myself included, especially if you have never seen them live and in person before. It isn’t the original flavor of Gn’R, and yes, Rose can still be a dick, but frankly, I am happy with how this turned out. It’s probably one of the last great VMA moments ever in history, next to 1999’s Aerosmith/DMC/Kid Rock collaboration alongside host Chris Rock’s phenomenal intermission banter.

This was nine years ago, I was nine years younger (damn it, I have a reunion next year), and this reminds me — anybody care to partake in doing the Bartman with moi? Deuce-double “O”-deuce, baby! (insert obligatory “bling-bling” reference here)