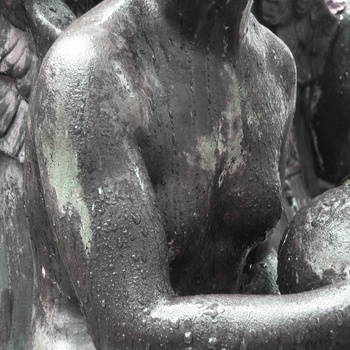 Just a few months ago, New York’s Kyle Bobby Dunn released the delicately powerful A Young Person’s Guide To. With only a little time to work on a new release, he’s ready to let you give a listen to his new EP, Rural Route No. 2, a stream of which is available on his site. It may only be two tracks clocking in at just over 20 minutes, but there are some compelling moments that any ambient music fan should be interested in. Unfortunately, though, too often the disc seems stuck in neutral.

“Dissonant Distance” starts the 3″ CDR with a glacially slow build of high-end white noise. Two minutes into the achingly long crescendo, variations in the shimmering sheet of sound begin to take shape. The pliable, flexible noise aches and groans as it reaches a climax like a metallic flag flapping in a gale. Rather than letting this moment encapsulate the listener, though, the wind dies down, the ghost of high-register synth lingering in the air. Slowed down, bassy radio samples produce an eerie, claustrophobic environment. This too fades, though, the swirling clusters of rumbling clouds floating away, regrettably without incident. Where a noise artist would push that boundary, break a lightning storm over your head (for better or for worse), Dunn’s ambiance fades, seemingly unwilling to test the listeners’ willingness to push the boundary with him.

The longer of the two tracks, “Senium III” (what happened to the other two “Senium”s?) clocks in at just under 11 and a half minutes. Chilly, angelic warbles of indeterminable origin waft into place, two “chords” alternating, back and forth, back and forth. The two sounds slowly turn discordant, gaining some jarring quality with each repetition. Then, the sounds slowly pass discordance and become harmonious. Then they jar again. Eventually, the waves drift away, replaced by tinnier, higher pitched versions. The same cycle repeats itself succinctly a few times, each with its own timbre and pitch, yet always with a consistent structure.

In the description of the disc, Dunn’s instrumentation is said to include guitar, strings, radio, and organ. Unfortunately, most of the sounds on the disc seem to come from two, maybe three sources. There aren’t many distinguishably different sound artifacts, leaving the piece feeling rather one-note. That fact, combined with the sparsity of challenging moments, of non-ethereal pieces means a flatly nice record, where a stronger, more moving piece could have easily come to fruition.