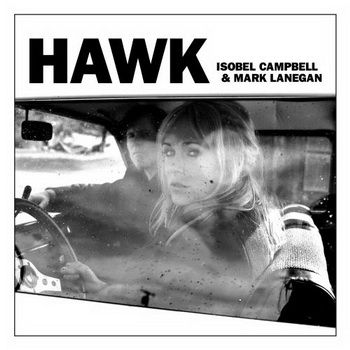 Their work together isn’t what Isobel Campbell and Mark Lanegan are primarily known for, but after three full-length records, an EP, and multiple stints on the road together, a collaboration that once seemed a likely one-off has become a relatively steady gig. The initial allure of this pairing was the stark contrast between Lanegan and Campbell’s voices. It’s the vocal equivalent of putting a grizzly bear and a pixie in a recording booth together. But after releasing their second album, the achingly beautiful Sunday at Devil Dirt, which married a dark, brooding mysticism to a healthy dose of stripped, dirt-road blues, it became clear that this duo had moved well beyond being a mere curiosity.

Hawk sets out down the same dusty road as Sunday at Devil Dirt, only Campbell and Lanegan seem to be traveling with a greater sense of urgency and abandon this time around; clearly, they either have somewhere to be or something to get away from. “You Won’t Let Me Down Again” chugs along like a freight train rumbling through some backwoods, with guest James Iha (Smashing Pumpkins) adding a pained and searing solo to give the track bite. “Both eyes on the road ahead/Don’t want to look behind,” sing Campbell and Lanegan, “you won’t let me down again.”

“Come Undone” revisits the dark romance and seduction found on Sunday at Devil Dirt’s “Come on Over (Turn Me On)”, with a similar string arrangement and an ominous beat that suggests a relationship is now over or teetering on a very fine edge. By sharing vocal duties throughout this song, Campbell and Lanegan become the voices of these jilted lovers, confessing mutual feelings of helplessness for not being able to repair the damage done or even to speak of it with one another.

The velocity of the duo’s escape escalates at points and showcases Campbell’s willingness to incorporate different styles and add unprecedented guitar muscle to her writing. “Get Behind Me” is an amplified romp that threatens to come off the rails as it barrels through five minutes of rumbling and tumbling, electrified blues. The instrumental title track is a bold, screeching racket that jars the listener, but its recklessness feels appropriate here—exigent, hasty, and not overly thought out—much like the journey Campbell and Lanegan seem to be undertaking.

The vocal interplay between Campbell and Lanegan is as rich as ever. Album opener “We Die and See Beauty Reign” is reminiscent of previous slow, spare haunters, with the two registering barely above a whisper, Campbell’s voice floating just above Lanegan’s murmuring. On “Time of the Season”, the duo attempts a new dynamic. Backed by swirling strings and upbeat, acoustic strumming, Campbell and Lanegan take the forefront together, never straining or straying from a gentle rhythm as they tell a story together. It’s a gorgeous effect that almost sounds as though the listener is hearing two sides of the same voice, the same person.

One noticeable difference between Hawk and its predecessor is Lanegan’s voice being altogether absent from four songs aside from the album’s instrumental title track. Campbell goes it alone on two of these songs, “Sunrise” and “To Hell & Back Again”, creating ephemeral, hypnotic journeys with her soft and seductive delivery.  American singer-songwriter Willy Mason joins Campbell and sings lead on two songs, including a faithful rendition of “No Place to Fall” by the late, great Townes Van Zandt. But while Mason delivers admirably enough on these tracks—sounding hauntingly like Van Zandt, actually—these performances feel somewhat out of place, and the listener cannot help but wonder what Lanegan’s distinctive growl could have done with this folk, country-tinged material. Facetious at it sounds—especially given that Campbell did the heavy lifting on this record in terms of writing and arranging—one almost feels as though she is cheating on Lanegan on these two tracks with Mason. The problem is that Hawk so painstakingly and intimately connects Campbell and Lanegan’s voices, that to hear another male voice enter the scenario unintentionally signifies something meaningful in terms of the record’s movement and story—not just Campbell asking a friend to sing with her.

I can’t yet say if Campbell and Lanegan have outdone Sunday at Devil Dirt here, but they have realized a different type of record, even if it’s one done in a similar musical style. While constructing Hawk, Campbell commented that she felt more like a movie director than a composer, trying to make the sounds and ideas in her head project into the real world. And I think I understand the movie director comparison now. The best of these songs manage to conjure up vivid images and feed into an overall arc that resolves by the album’s end. On the record’s closer, “Lately”, the honey drips from Lanegan’s rugged croon, with warm strums and gospel-style singing behind him. “It’ll come clean in the wash, I know that much is true,” sings Lanegan, “…move forward now and leave the past behind.” And the image that springs to mind is that of a once-troubled man walking off into the distance, now with some sense of deliverance and maybe even serenity. A far cry from where things began.

Hawk may travel along many of the same roads as Sunday at Devil Dirt, but it becomes a beautiful journey all its own.