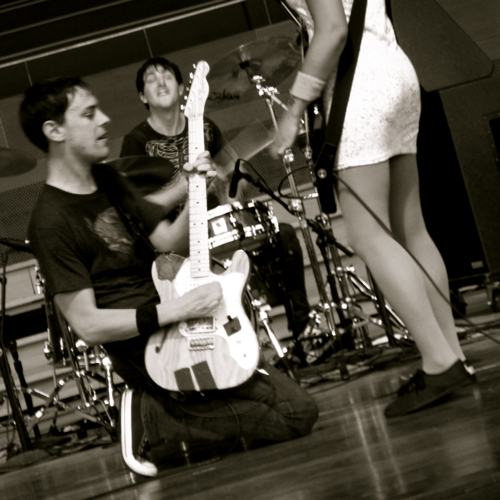 Theres no way to deny the energy music inspires. If it moves people to their feet or incites thrashing, no one can, or rather should, try to stop either.

This is the problem with summer concerts at Millennium Parks Jay Pritzker Pavilion, namely those of the New Music Mondays series. In an attempt to appease a younger demographic, organizers place musicians accustomed to hole-in-the-wall venues and their fans in a comparably restrictive environment.

This isnt a sequel to my review of The Books performance at said venue, in which I questioned the wisdom of booking cutting-edge rock and pop acts to play for free in a large public space. Then again, in many ways it is. The same series of clashing opposites comes into play: band versus venue, fans versus security, energy versus vibe. Both artist and audience need to make the best of a non-ideal situation. And, yes, a slew of dancing hipsters make this reviewers evening a memorable one.

If I havent deterred you yet, feel free to keep reading.

The evening began uneventfully with a half hour of power courtesy of Chicago-based opener Disappears. I admit that I had reasonably high expectations upon learning of the groups ties to the Kranky imprint (home to both Deerhunter and Atlas Sound) and their charged live performances. The performance was charged all right. Disappears specialize in a brand of raucous garage rock heard many times before. Vocals and rhythm are lost in a sea of wild guitar noise. I liken it, somewhat reluctantly, to a Stooges LP come to life: a visceral experience with cheap production values. (See, I didnt mention the girl clad in a cut-up Led Zeppelin tee and high-waisted jeans on tambourine once!)

It can be difficult for listeners to discern between The Thermals on record and live. When they perform, they play their songs note-for-note, a notoriously hit-or-miss approach. It is tempting to write a show, never mind a group, off as stale for just that. Fortunately, The Thermals body of work is solid, so this isnt necessarily a problem. I mean, does delivery even matter when youve got the right stuff?

The trio took the stage to a very enthusiastic reception from a decidedly more diverse, down-to-earth audience uncharacteristic of these concerts (or at least that of The Books). The band clearly sensed this. They fed off the crowds exuberance, which made for a charged beginning consisting largely of new material. Personal Life, the follow up to last years Now We Can See, drops in early September. The new songs evidence almost no deviation from the sounds of their previous work. Hutch Harris lyrics are socially astute. The compositions are full of punky, rapid-fire chord progressions, melodic basslines, and tight drumming. Somehow it works. It works each and every time.

When bands go out on the road to try out new material, its safe to assume that they feel obligated to reward their fans with a carefully selected batch of hits for sitting through the unfamiliar. Aside from the occasional request for Pillar of Salt, the audience responded warmly to songs that werent, well, Pillar of Salt.

We Were Sick and Returning to the Fold elicited some of the strongest reactions. However, no one seemed to think much of waiting for them. Fans generally dont find a first-hand look of whats to come to be a chore. If anything, the wait most likely made their old favorites sound even better than they remembered.

The set continued. Harris used the excellent acoustics of the space to project his voice. In fact, not one member of the group shrunk in their surroundings, a real threat to groups who perform in the Pavilion. Everyone shined in the massive environment.

Its clear that The Thermals made the most of a difficult situation, but what about the audience?

Remember when I said earlier how the dynamic energy of a rock show cant be contained? Security at Millennium Park certainly tried to do so. The area upfront was closed to all but members of the media. So while the professional photographers (and myself) sat comfortably, the real fans gathered at the metal barriers, bopping along happily throughout the first few songs.

Then a sweaty old dude wearing a cut-up tee shirt and a doo rag broke the barrier, pulling off moves reminiscent of Michael J.  Foxs Chuck Berry impersonation in Back to the Future. A fiery red head in gold sequined shoes followed suit. As the two finished bouncing about up at the front of the stage more people began to jump the barrier.

You know where this is going. You know whats coming next.

And then the moshing began. People of all stripes pogoed, pumped their fists in the air, and even got a bit sweaty as I struggled to retain balance, standing on my plastic folding chair with my camera in hand. It was what youd expect at a Thermals gig, but the context made it all the more remarkable. Ardent fans fought against the rules in order to create the kind of wild yet friendly atmosphere they wanted.

Security guards dispersed the mosh pit soon thereafter. People returned to their seats, but they were far from impassive. The drug-induced dancing continued despite the circumstances, right up through “Now We Can See” and an encore that included the song superfans and casual listeners alike came to hear, Pillar of Salt.

Much of the evening felt scripted, including all the aforementioned mÃªlée. The show itself was, dare I say it, predictable. But hey, for a predictable show, it was pretty damn good.