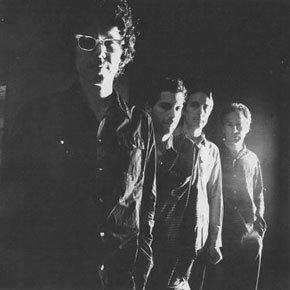 A Bonnaroo performance never materialized, but the Jayhawks definitely aren’t sleeping on any of this reunion business. The alt-country legends have announced that, in addition to their already reissued debut LP, they’re also re-releasing two more albums: 1992’s Hollywood Town Hall and 1995’s Tomorrow the Green Grass.

The news comes hot on the heels of a Jayhawks hometown set at the rain-soaked Basilica Block Party on July 10th, and the new reissues – which will be released via Sony Legacy – are said to feature five previously unreleased tracks. Furthermore, Green Grass will be packaged with a second bonus disc not so cryptically titled, The Mystery Demos. It’s not clear how mysterious those demos could possibly be since Sony Legacy just released The Jayhawks Anthology, which includes many of the band’s rarities, B-sides, and a DVD.

Jayhawks co-founder, Gary Louris has said that Hollywood Town Hall and Tomorrow the Green Grass were some of the high points of the band’s career. However, the latter was the last record the band would ever record with singer/songwriter Mark Olson, and the Jayhawks would never be the same. Olson went on to lay down eight solo discs while Louris stayed with the band until they eventually disbanded five albums later in 2005.

Louris – who is supervising the reissues – went on to record solo material of his own, but expressed his sadness regarding the departure of Olson in ’95. Last year, he told Pop Matters that the split with his songwriting partner “wasn’t because we didn’t have any musical ideas. It was because we had too many.” He went on to say that singing the Jayhawks’ tune “Blue” from Tomorrow the Green Grass always made him “think of Mark a little bit.” The song has a lyric that reads, “ It’s hard to sing with someone who won’t sing with you…I ever thought I’d miss you/That I’d miss you so much.”

There are no future Jayhawks shows planned, so anyone looking get nostalgic and wallow in some of the melancholy will have to settle for Olson and Louris’ 2009 joint effort, Ready For the Flood – or pick up Olson’s eighth solo set – Many Colored Kite – next Tuesday, July 27th.