The Ginger King Hits Kentucky: CoS at Forecastle ’10 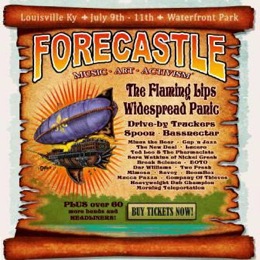 We know what you’re thinking: Wait, the Ginger King is back? Don’t get too excited. He’s not here to rant and rave and kick up some dust. No, he’s here to do what we’ve been doing each week since summer started a month or so back. He’s here to report on a music festival. Louisville, KY’s Forecastle Festival, to be exact.

In the magical world where the South slams against the Midwest sits Louisville, Kentucky; the only possible home for the 2010 incarnation of Forecastle Festival. Less folky than Bonnaroo and less urban than Lollapalooza, Forecastle is a truly open festival that provides picturesque views from anywhere on the grounds and wide ranging mainstream and underground acts. This yearly festival, now in its ninth, goes the opposite direction of many trends now commonplace at festivals. Hard liquor available to drink at solid wooden bars? Glassblowers making paraphernalia live all day to sell? Stages with such weird names as North, East, and West? An indoor smoking lounge complete with A/C? Sponsors not named after domestic beers and cellphones? All of this madness is at Forecastle and all of it was welcome with open arms. Welcome to Kentucky, you’ll love it here, even if it’s only for the weekend.

Forecastle promotes itself as a combination of art, music, and activism and this was true with acts like Cirque Berzerk and their brand of circus tricks, complete with their own tent, or The Sustainable Living Roadshow, which provided green-themed carnival games, bizarre art pieces, and their own small stage right near the entrance. While some festival-goers avoided the art and activism, the music still stood strong as the main focus. With a combination of jam bands, 90’s alternative, 80’s comebacks and more DJ sets and Bluegrass jams than you can shake a twig at, Forecastle was able to satiate every music taste, no matter how trite or cliche it might seem to your average Pitchfork reader. And just like the city it’s in, Forecastle is very spread out, providing multiple neighborhood type feelings with different settings, moods, and scenery all presented with a Southern hospitality and a Midwestern smile.

In addition to music and arts, Forecastle is also host to a completely independent local made urban skate park. Near the entrance, this skate park features interchangeable graffittied walls, ramps, and rails all built around concrete pillars holding up the interstate ramp above them. During the day, such events as Stop, Drop & Rad or Heaviest Old School Trick were held where local skaters and bikers risked blood and broken bones to show off for all the people entering the festival. At night, the Magic Blood Ceremony took place, which I still might not understand but was enjoyable with the skaters and bikers donning face paint and performing to heavy drums and trance-like sounds.

Arnett Hollow, a Kentucky bred Bluegrass band, took the stage and if the collection of drunk chicks, the impromptu waterfront firework show, or dancing couples were any indication, they rocked the Ohio River. With only a five piece, Arnett Hollow features a fiddle player (seems to be a new member of the band) and an upright bass player in addition to a drummer and two guitars, the bands excitement was palpable and their emotion carried with their sounds into the night air. With excellent sound quality and the sizable crowd, Arnett Hollow played a variety of original material and even a treat for the crowd: an epic, almost heavy rendition of The Devil Went Down to Georgia. Not surprisingly, that got the crowd riled up and kicked off the weekend just right.

After a few songs, The Tillers declared their stage was too big. This kind of charm was throughout the festival, but for these three musicians from Cincinatti, it was true. Featuring a banjo, guitar, and the magical upright bass, these guys provided an early afternoon flashback to a simpler and slightly more intimate time for music – great good time music.

The Disco Aliens landed with early electronic dance music for a small but fun crowd. Being in an incredibly hot area early in the day, the dancing was slow to start off, but when they demanded everyone stand up, the majority of the scantily clad girls did get up and start to move.

Southern grown Booty Sweat took over right after The Disco Aliens and kept the crowd moving with heavy bass and pretty stellar DJ Set, for the majority of the crowd, this was the first in a day of warm-ups for Bassnectar later in the evening.

For many in the crowd Saturday, Cake was a highlight. Beginning their set with “Comfort Eagle” and a quick discussion with their audience and fans, a barrage of all their hits was a lost in a haze for the crowd. Sprinkled in between sweat-filled renditions of “Short Skirt, Long Jacket: and songs like “Wheels”, Cake dished out a few new tracks off their upcoming long-awaited new album. Featuring crowd participation throughout many of the songs, John McCrea bantered with the crowd for the majority of their set, firing up the sun-burned attendees and setting the stage for what many had been waiting patiently for… Devo.

DEVO took the stage as the sun touched down in complete DEVO jumpsuits and their new masks, which according to their marketing materials represent our equality and desire to not focus on the things that make us different. Hmm, good job Devo. After an energetic performance of “Don’t Shoot, I’m a Man”, DEVO went to the back catalog with “Peek-a-Boo”, complete with a giant video screen behind them that played a combination of new and old DEVO visual aides.

With breaks to change outfits and equipment, DEVO explained humanity with a quick video presentation prior to another string of songs that led to a video salute featuring “The Devo Corporate Anthem”. After a show full of hits and tracks off their latest effort, Something For Everybody, the band returned for a lengthy encore that featured their Booji Boy character coming on stage to deliver lengthy discussions of our world, Michael Jackson, and other dialogue that turned many parts of the crowd against them in classic DEVO style.

One man, skinny like a high school student, hair like an Icelandic metal bassist, and new to Louisville, Bassnectar took advantage of the dance-starved crowd on the West Stage. Actually able to feel the bass throughout the crowd, the one man group performed a selection of great mixes as the night got darker and darker throughout the park. Amongst the crowd, deep cuts from the ’70s through the ’90s were remembered as bright, neon colored ravers hula-hooped and danced for what many seemed to be waiting for. A guy dressed up as a Navi was also there, so if you like Avatar, you might enjoy Bassnectar.

The Ocean Stage played home to Chicago-based Greenskeepers, which provided only an extended DJ set. Reaching high with “Lotion”, Greenskeepers might have been playing a little early in the day to really get the crowd going. Most days, The Ocean Stage provided a good place to enjoy some original electronic and DJ sets and Sunday was no different. Greenskeepers put the lotion in the basket and Louisville did not give it the hose again, all is well at Forecastle.

Zooey Deschanel and company took the stage as the day got cooler and night started to fall on the last night of the festival. The crowd settled into the fact that they weren’t seeing The Flaming Lips until later and enjoyed “I Thought I Saw Your Face Today” off the duo’s first album, Volume One. Even in a festival setting, Deschanel pulled off some whistling, which received some loud cheering that got lost in the multiple “I love you”s from men and boys everywhere. M. Ward and the rest of the backing band was solid and together She & Him provided a smooth gentle ’60s vibe that perfectly fit the setting of the Kentucky sun.

With the daylight behind their back, Britt Daniel and the rest of Spoon opened with “The Beast and Dragon, Adored”, which unveiled an eclectic mix of songs to follow, all requiring a variety of equipment changes (including a horn section on “Stay Don’t Go”), moody looks into the crowd, and on-stage banter. Playing for many who have never seen Spoon live, the crowd reacted well to their sound early in the show, but like many headliners, there was just other stuff to do, so some of the crowd did cut out early while others started showing up for The Flaming Lips.

The Ocean Stage answer to The Flaming Lips, Boombox played to a crowd that just wanted to dance the night away. Blending live guitar with a fully equipped DJ setup, Boombox’s Russ Randolph and Zion Rock Godchaux created some smooth jams that blended with pounding bass and guitar lines that worked over an intimate and completely inebriated crowd. “Stereo” closed their set, and even a week later, should still be playing in the heads of every 20-year-old present.

Easily a highlight for anyone who attended, Cirque Berzerk had a tough time this weekend with people squirt-gunning their body make-up off as they walked through the crowd, odd location away from the majority of action yet close enough to the main food thoroughfare for people to want to go. Providing two to four shows a day, The Los Angeles Circus, as the program says, performed trapeze, ring, fire, acrobatic, and sexy sexy tricks.

It was hot, literally, with pyrotechnics from their entrance and their finale spectacle that involved loads of firebreathing. The highlight of the show for many seemed to be the Manson-esque clown on stilts, who breathed fire… and rode a tricycle… and pulled a hat out of a rabbit. Don’t believe me? Try and see a show. And pick up a churro while you’re at it.

One of two 90’s flashback headliners (along with The Smashing Pumpkins), The Flaming Lips are well renowned for a lengthy and intense stage show and did not change their ways for Louisville. Opening with the standard giant crowd surfing plastic ball and an assortment of lights and people on stage, the Lips gave Forecastle one more dancing, yelling, pot-smoke filled crowd experience. While the show did feature lengthy political diatribes and extended musical noodling, the crowd remained upbeat and excited regardless. One rare highlight included a paraplegic fan, who decked out his wheelchair in the most fashionable way one could for a party. That right there is The Flaming Lips; their fans are fans through thick and thin.