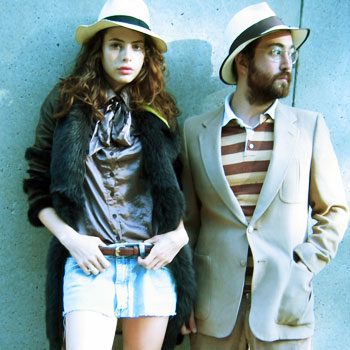 The genetically-gifted combination of Zargifon and his supermodel girlfriend Amatla have put out a single.

That would be The Ghost of a Saber Tooth Tiger, the musical collaboration of Sean Lennon and Charlotte Kemp-Muhl, and those are their futile aliases. According to Spinner, the duo more simply known as GOASTT has released its first single, called “Jardin du Luxembourg”. It’s named after the Paris park of the same name, but the singing is all English.

It’s a fun little rock song that, like plenty of Lennon’s other material, oozes the influence of his dad and daddy’s psychedelic contemporaries. Musician/producer Mark Ronson produced and plays bass on the track, while Kemp-Muhl and Lennon share vocal duties.

The single, out now at Chimera Music and on iTunes, also features as a B-side a version of “Comic Strip” by Serge Gainsbourg (with French singer-songwriter Matthieu Chedid). GOASTT tells Spinner the duo intends to release some 45’s soon featuring alternate versions of GOASTT songs as well as covers.

And don’t worry, a proper album is in the works too. Two, in fact. This fall, GOASTT will put out an album of its early acoustic material. Next year, Lennon and Kemp-Muhl have another album in the cards featuring more guitar- and synth-rock.

In the meantime, give “Jardin du Luxembourg” a spin below.