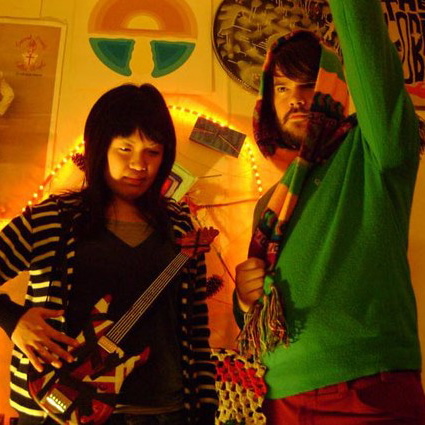 The bright indie-punk ballads of Eternal Summers are delivered solely by Nicole Yun (vocals/guitar) and Daniel Cundiff (drums), but the creative force behind the duo’s work is nine-strong.

Yun and Cundiff are each part of Roanoke, VA’s mystical musical force known as the Magic Twig Community. The collective’s mission since 2005 has been to collaboratively write, record, and perform; They currently share an aural workspace and recording studio equipped with reel-to-reel tapes and a digital 8-track machine, aptly known as the Mystical Fortress. Plus, they frequently swap members creating a variety of new bands (The Young Sinclairs, The Sad Cobras, Rootstone Jug Band, Eternal Summers, The Missionaries, SUNKING, and Boys Lie, to name a few).

In an attempt to stave off the beginning of fall, Eternal Summers will be releasing Silver, their debut LP, September 28th via Kanine Records. About one month earlier, on August 31st , the duo will drop the single “Pogo”, which also features their dream-punk cover of The Beatles “All I’ve Got To Do”. But why wait for new tunes? Check out the album’s first single, “Dye”, below, as well as the complete tracklist.

Eternal Summers have not yet announced a fall tour in support of the album, but we expect that to come soon.