Break Yo’ TV: Kississings – “Anything U Want” 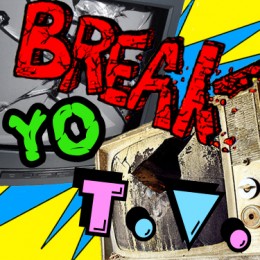 Kississings’ MySpace page describes the band’s sound as “nonsense words flavoured with hot voice and broken English,” which puzzles me. These words are anything but nonsense – they are a carefully constructed anthem for female empowerment. Although the hot voice of the artist, Kirsi Kissinger from Helsinki, repeats 24 times that she’ll do “anything u want,” the key to unlocking the profound lyrics are found in the three times she sneaks in this gem:

And judging by this cinematic masterpiece, all a gal really wants to do is throw on a pair of tie-dyed legging and a crocheted bodysuit and get together with a few of her best friends to air hump across her apartment. Take that, boys.

The video opens with a close up of a woman’s mouth moving freakishly fast, and she is somehow able to make the sound of a yard full of screaming people emit from her vocal cords. I tried to replicate this myself a few times and think I was close to getting it but was forced to give up when one of the grocery store managers told me I had to leave because I was scaring the other shoppers.

But I digress. The booty shaking and slapping tour de force that follows the playground screaming is a wonderful mashup of cameltoe, muffintop, and bottom boob. However, it seems that the gifted choreographer didn’t realize that when the lyrics were added to the finished visual piece, the women’s bums were often facing the camera more often than not. Thankfully, a quick-witted art director saved the day by carefully overlaying pair of colorful lips that mouth the lyrics on the girl’s backsides, which acts as the piÃ¨ce de résistance to really tie everything together.

Check it out for yourself if you’re ready to feel confused, empowered, violated, and maybe even a little turned on.