Korn – KoRn III: Remember Who You Are 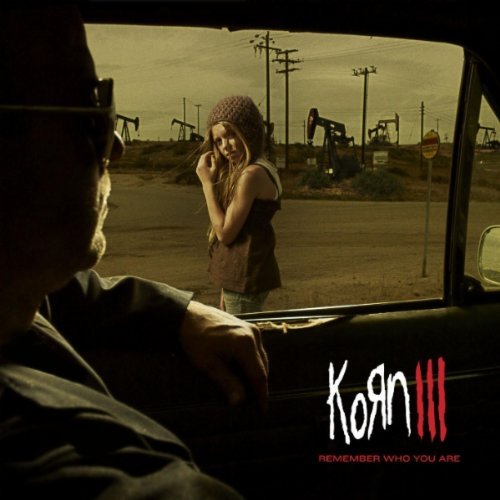 Nostalgia is not a cruel mistress of guilty pleasures, she’s a rape victim with goth eyeliner, Volcom tattoos, and a mullet. In a world where new devices can stream everything at the touch of a screen, Pac-Man and Turtles In Time get revamped and resold side-by-side with Soul Calibur IV and Halo Wars. For the individual, nostalgia is that warm, fuzzy feeling we get when we tease ourselves for wearing Jordache clothing in our elementary school photos, or listening to Take That and Hanson.

For the labels, childhood and adolescent memories get repackaged for a dime, presenting numerous bottom-shelf tribute albums, franchise reboots, and the like. Today’s society also seems to have an affinity for reintroducing old themes into a new culture, but the gaps between old and new are growing ever closer (Faith No More and RATM reunions? Put out a new album or stop with the cock-tease). After toying with different sounds, losing members to God and restauranteurs, Korn claims they have come back with identity crises in check on Remember Who You Are. Kudos? Um…

Korn is of a lesser Claypool manifestation, a fascination with Jonathan Davis’ personal demons, and some California punk or hip-hop mixed in, as per the coinciding album’s theme. Remember Who You Are was highly anticipated to be a return of Life Is Peachy‘s original roots–low-fi, down-tuned analog recording with some heavy crunching. All the signs point to “YES” on that hype so far, with “Oildale (Leave Me Alone)” and “Are You Ready To Live?” flaunting necessary flavors, the video for the former reminiscing on the swing-set cover art from Korn’s eponymous debut, relyinh heavily on Davis’ past as an abused child to shock our viewers.

Unfortunately, the random “Uber-Time” intro is a fart in the wind…the guitar enters, we get to “Oildale”, and the rest of III is on repeat. Returning to roots can usually only go one of two ways — either you’re inspired, or you fake inspiration to avoid coming out empty, like a virgin’s first orgasm on wedding night. Something was bound to be a little off, a distaste for maybe three or four tossers, like virtually everything else post-Leader; with only three original members remaining, bear witness to a bit of role reversal on three or four excellent songs beside multiple WTF moments and sheer whining. “Lead The Parade” and “Fear Is A Place To Live” carry bouncy funk, crunch, and a Life Is Peachy manic chaos, adding some authenticity. Then…

“Okay, slap bass, whisper, scream, slap bass, whisper, scream…fuck.” Monotony defined, some task when you have a kick ass drummer like Ray Luzier at your disposal, and Davis, who does everything he does pretty damn well, until the point where he thinks he’s Mike Patton. “Are You Ready To Live?” and “Let The Guilt Go” use nearly identical opening sequences, there are no scat vocals or bagpipes (this is supposed to be a marketable return, mind), and “Pop A Pill” definitely did not live up to its potential. “Marketable” becomes an operative word here, as once again, the hype outweighs the seemingly fully capable redemption.

I have the utmost respect for Munky and Fieldy (Shaffer and Arvizu to their kin) as a genuine collaborative duo on record, as they both have strong skill with their instruments of choice when it is fully realized in studio or beyond. Seriously, what the hell happened? Remember who you were and are, not what you think you should have been or what you think Ross Robinson would have done. Experimental? Lengthy and dull in time, but feels like premature ejaculate? A short burst of “voila” under the mess? Sounds familiar.

On III, everyone…”I’m madly in anger with you.”