Hannibal Buress – My Name is Hannibal 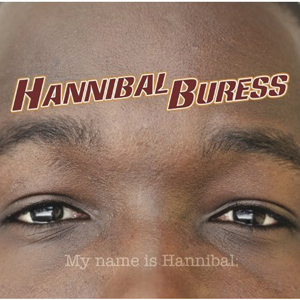 In Chicago, Hannibal Buress is a classic case of “local boy done good.” The comic put in his time working odd jobs and doing stand-up whenever he got out of work. He was eventually hired on as a writer for Saturday Night Live. Now, he’s got a weekly residency at the Knitting Factory in New York and has been name-checked by Chris Rock. Dude’s on top. And now, finally, the man has his own stand-up album, My Name is Hannibal, which was recorded live at the (now closed) Lakeshore Theater in Chicago.

While he may be making his money writing sketch comedy, Buress is one of the best stand-ups in the game right now. Yes, it’s observational humor – which everybody ever does – but Buress’ brand of it is just so damn odd. Who else has a joke about punching a kid in the chest because he was “showboating” while playing Guitar Hero? How about a joke outlining the hardships that went into inventing the flaming Dr. Pepper?

For anybody who’s seen him before or looked him up on YouTube, there are definitely plenty of bits on the album that have been circulating in his sets for a while now – the one about kicking pigeons, the whole thing about pickle juice, most of the jokes about his name – but perhaps it says the most about this record that the jokes are still funny after having heard them over and over again.

And Buress isn’t afraid to carry out a joke for what could be far too long. He gives himself some time to set it up, he rambles for a while, and the payoff is always worth it. In one bit, he talks about God’s plans, which eventually turns into a joke about how God doesn’t keep yes men around, mumbling, “I need people to keep it real around me. Like if I’m doing some whack tracks in the studio, I need y’all to let me know.”

Really, there are so many wonderful and ridiculous moments on the album. He wants metal arms “like Jax from Mortal Kombat.” He talks about buying a white baby in Amsterdam because his mother told him, “Never pass up a good white baby sale.” He outlines an ad campaign by syphilis, during which syphilis screams in frustration, “I killed Al Capone!”

The easy comparison that people always seem to make is to Mitch Hedberg – dry-but-killer observational humor with great timing and unexpected (if sometimes roundabout) payoffs. But calling Buress “the black Mitch Hedberg” is pretty short-sighted. Just as there will never be another Mitch Hedberg (black, white, or otherwise), there’s never going to be another Hannibal Buress. He’s an honest comic who makes weird asides and awesomely silly observations. He’s not copping anybody’s style – it’s obvious that the “character” you hear in his delivery is just him. Hannibal is himself. That’s why he’s so damn funny.