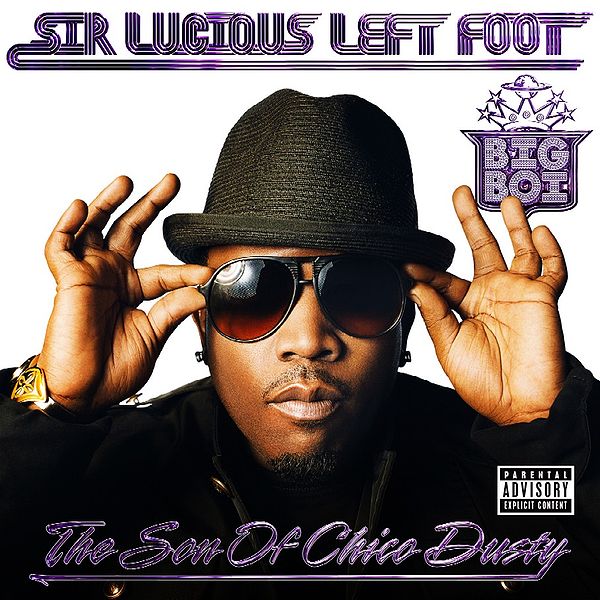 If there’s any solo album most fans would have happily waited some two years for, it’d have to be Big Boi‘s. As Outkast, with the slightly more whimsical Andre 3000, the duo reinvented rap music beginning in the early ’90s by infusing it with elements of funk and creating a whole ATLien vibe that hardened hip-hop enthusiasts and weird alternative kids alike ate up. Hoping to appeal to that same audience, Big Boi at last releases his first solo album, Sir Lucious Left Foot: The Son of Chico Dusty. While he’s not reinventing the game with this one, the effort does illustrate the perils of going it alone while providing enough meaty tracks to justify some delays and set the stage for a bright future as his own solo entity.

It’s perfectly clear by the end of the album that Big Boi, despite years of experience, is more comfortable with someone else to back him up in the studio and come to decisions as a unified front. That’s not to label him as an inferior MC, but based on the Jerky Boys-esque skits (including the awful David Blaine joke at the end of “General Patton” and on “Be Still”, which ruins the heartfelt slow jam vibe provided by Janelle Monae), he’s going for bargain bin laughs, despite being one of the premier MCs in the business today. More serious than a bad sense of humor is his ability to meld with his cameos and fellow MCs. That skill made Outkast a success, but with this solo LP, it spells doom for several tracks. It goes beyond a simple bad choice of a guest star; you can hear the slight yet myriad differences in the lyrics, beats, production and beyond.

“Follow Us” takes on the overblown, cheesy vibe needed to sustain the lackluster chorus by Vonnegutt. “You Ain’t No DJ” features Yelawolf, arguably the worst MC in the world. Fret not, though; Big Boi sinks to his level with bad rhymes and sloppy delivery. And with 10 out of 15 tracks on the album featuring some guest, despite this being the collaboration-heavy world of hip-hop, you can see just how natural it is for Big Boi to spread the workload out in a time where he should shine thoroughly.

By the reverse of that logic, some of the best tracks feature cameos by arguably bigger names than Big Boi himself. That can easily be explained by the fact that they’re more in vain of Big Boi’s back catalog. “Tangerine”, featuring T.I., is the dusty, rhythmic, and slow burning recreation of an Idlewild outtake. “Fo Yo Sorrows” takes Boi back to his ATLien roots with this dirty, space-funk drug ballad that’s shot to Venus with help from George Clinton. “The Train Pt. 2” takes a slightly more Ravi Shankar approach to “Fo Yo Sorrows” and offers Big Boi a chance to test his falsetto, moving away briefly from his standard smooth-as-silk bass vocals, adding to the theatricality of the big, spacey groove. But when Big Boi does find the courage to go it alone, he has some positive results. “General Patton” is a chance for the world to see Big Boi at his best: Going off on people with enthusiastic and inventive rhymes that make people cheer in adulation and cower in fear.

Call it nerves, call it further proof of the effects of a hazardous industry that is wrought with delays, or whatever seems to fit, but for better or worse, all these aspects and more created an album that does its best to shine regardless. And while it fades in parts, the album as a whole is a positive step in the evolution of an MC we’re all pretty happy with already.