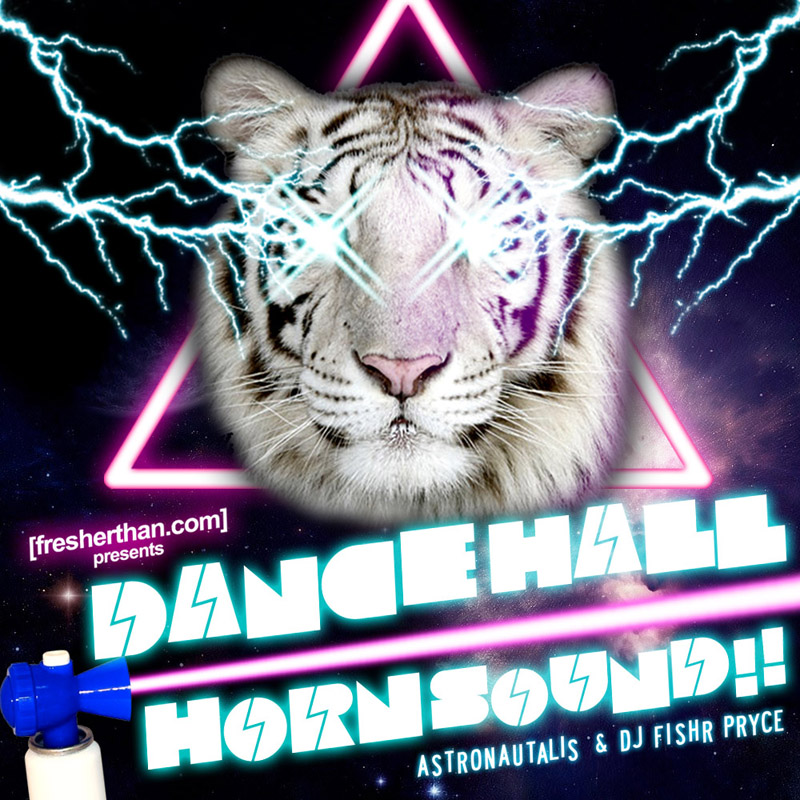 I first heard Astronautalis back in March when he performed with some Doomtree/Rhymesayers regulars at the Bottom Lounge here in Chicago. The tour manager for the show told me that he was kind of a hip-hop Tom Waits: a theatrical, growling, whiskey swigging rapper from the south. My kind of people. I was completely blown away after his set. His combination of blues, rock, and hip-hop blend together in a special kind of American Gothic that finds the boundaries of rap and spoken word and ties them to a pick-up to drag them a few yards up the road.

And now Astronautalis has pushed the boundaries once more with his new mixtape, entitled DANCEHALLHORNSOUND!, that he is releasing online as a pay-what-you-can offer. The mixtape was released back in April as a way for Astronautalis to help offset his cost for his tour of Australia as opening act for Tegan and Sara. It was also meant to be an experiment for Astronautalis, and experiment he did.

The website where you can purchase the mixtape has a long story/history of Astronautalis’ (Andy Bothwell) journey into the world of hip-hop, and subsequently what led him to the making of DANCEHALLHORNSOUND! with DJ Fisher Pryce. It’s also an editorial on the state of modern hip-hop, indie rap, and indie rock. It’s a fantastic piece of writing that ushers in a new future of hip-hop, a new mixture of rock and hip-hop that will push the record industry to all “indies”. As I said, you can read this on the website, but indulge me as I post my favorite part here:

I, like many others became bored with the monotony of “indie-rap”, and have come full circle back to my youth. Now, like so many other former “back-packers”, I find myself listening exclusively (with a few exceptions) to the pop-rap music of braggarts, killers, and drug dealers…“Scribble Jam” and “The Rocksteady Reunion “ are gone, replaced by big budget affairs like “Soundset” and “Paid Dues”, and the word “indie rap” has lost meaning all together when Jay-Z leaves Def Jam, Cash Money Records is the new DIY, and almost every “indie” label you love is technically a subsidiary of some major label by way of a distribution deal…I see it as the start of an exciting new era. Jay-Z is spotted at Grizzly Bear shows, Sage Francis hires half the indie rock musicians from your high school mixed tapes to make his new record, and Kanye West steals notes from “I <3 Huckabees”, “Daft Punk”, and everything else in your girlfriend’s dorm to become an endless hit factory. At the same time, most every indie rapper I know (myself included) listens to more Young Jeezy than El-P, every vegan kid with a fixie knows more Clipse than Fugazi, and I have heard my Mom use the phrase “bling bling” on more than one occasion. Some will say that this is everything tearing apart at the seams, but I see this as a window into the future, a future where major labels are dead and everyone’s indie, so indie ceases to be a sales pitch. An era where anyone can pirate your album, so your album better be fucking good or else no one is going to want to give you money for it. Most importantly, the pop-stars steal from the little guys and the little guys steal from the pop-stars, and there is exciting and interesting music to be found coming from everywhere and everyone…not just the East Coast and the West Coast.

So with this new creed in mind, Bothwell stepped into the studio and created DANCEHALLHORNSOUND! by sampling his favorite pop and hip-hop tunes, as well as rock and blues samples to further that fusion he speaks of in his editorial. Bothwell’s quick and sharp flow bounces over the top of samples from Jay-Z, POS, Riverboat Gamblers, Snow Patrol, and many others. Many of the tunes hold the spirit of the editorial and become editorials themselves, such as powerful opener “Do  You Believe in Life After Thugs”.

The whole mix rolls together well from one song into another, and DJ Fisher Pryce even manages to mix in three fantastic freestyle tracks with the standard songs. Bothwell has a fantastic freestyle talent, and at his shows he usually closes with a freestyle based on suggestions from the audience. On this mix, he takes suggestions from friends POS and his son “Jake”, Tegan of Tegan & Sara, and Mike Weibe of Riverboat Gamblers, all by voicemail. Bothwell creates smart and witty raps about everything from Legos to Canadian presidents to The Good, The Bad and The Ugly. All of them are spot on, and none of them miss a beat. I have seen him do this in person, so I know that these tracks are indeed one-offs and totally genuine.

Unfortunately, while the entire album is mixed well and flows, there are some tracks that slow things down and get a bit tiresome. “Learn to Listen (ft. Andrre & Pierre the Motionless)” made my head hurt a bit from the repeated refrain at the end and the fact that who I assume are the featured guests have a drawn-out, slow mumble that tends to wear on your ears. Same with “Avalanche Patrol”, which is a slow jam that misses the mark a bit and moves slow.

Overall however, DANCEHALLHORNSOUND! has some great lines and great humor throughout—the track called “Turns out…this wasn’t Gomez’ number?” I found to be pretty hilarious. Bothwell admits on the website that this was above all an experiment, and while some may have fallen short, and some things sound off, he is incredibly proud of having been able to make this record at all. He hopes it is a push toward a new hip-hop and a new fusion of music. I couldn’t agree more. The more mixing of hip-hop and rock I hear (except for this), the more I love the idea of it. Bring on the fun, and check out Astronautalis. At least someone is taking action to change the course of things.