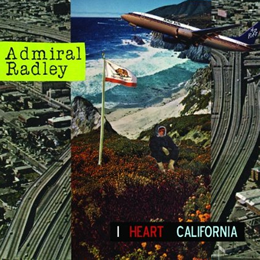 Unfortunately, I do not heart I Heart California. What could have been a great counterpoint to opposing (though much superior) recent records from Wavves and Best Coast, unfortunately becomes a muddled mess of having too many cooks in the kitchen and no clear direction from a concept band with seemingly no real concept. Sure there are terrific moments, but by the end, one song stands out for it nearly self-aware statement “it goes nowhere and it does nothing.”

But, let’s start with the good. What Admiral Radley gets is that California is more than Mavericks and movie stars. I have lived here for 28 years and I have never been surfing. I’d rather walk through the redwoods than lay-out and I live in Garden Grove, a place more known for its methamphetamines than its foliage. So sentiments like “We don’t really like the sun,” on standout track “Sunburn Kids” speaks to my soul, something Jason Lytle is pretty good at. I hold Lytle in about as high of regards as any musician ever, and just below my father and Jesus as far as men/deities are concerned. But as much as Admiral Radley and Lytle’s continual redirecting of the band’s formation fables are entertaining, it is the Earlimart contingent that has the strongest output on I Heart California. “The Thread” is as lovely a song as you will find this side of Belle and Sebastian, leaving you longing for another Ariana Murray-led number throughout the rest of the album. Call me a romantic, but the sentiment “will we live til 98, watch our hair go gray/will we go out with a bang or will we fade away/in other-words I hope that we still hold hands” tugs at my heart in the Up kind of way. Yeah, it’s real good.

As for the producer/co-frontman Aaron Espinoza’s contribution, he gets much higher marks for his songs than his production work. His numbers are consistent throughout, and it seems he knows what to do better behind the scenes on his numbers (probably because it is his vision on those songs) with “Ghosts Of Syllables” and ”Lonesome Co”, both playing like decent, competent though ultimately inconsequential fare. Only “Ending Of Me” really makes a mark, and this is only because I know it plays better live than on record.

Lytle is more problematic, though more memorable. “Sunburn Kids” is a win and “I Left You Cuz I Luft You” is a masterpiece, but the title track feels forced, cliche ridden, and full of awful production choices. From the “yeah’s” that appear out of time and way too loud robotic voice saying “I love California” in the chorus, you realize that the gimmick of the song is all it really has going for it, and it grows old after about a minute. “Red Curbs” is more like classic Grandaddy, but throwaway classic Grandaddy, and “G N D N” goes nowhere and does nothing, easily the worst song on the album (Well, ”I’m All Fucked On Beer” also sucks pretty bad, and you know it must be pretty bad to make me not like a song with that title). It is just a stall out number that seems self-fulfilling, and so vague that it’s flat-out boring. Don’t even get me started on Lytle’s breakdown in this song, which contains the insight of a 13 year old in 1993. Yeah, dated and immature, that’s what I meant there.

But even as I write this, it seems like there should be plenty to like here, but with three different vocalists, it seems like there is no clear creative direction. The album needs a clear leader, but everyone seems comfortable letting each other make decisions and this works against the album as a whole. Bands need leadership. Or, much more talent like Wolf Parade. And maybe it’s my love of Lytle that left me more letdown than anything he has ever created, but I also feel this could have been such a cool idea for a California record. I just don’t believe it when he says “I am California”. No, Beth Constantino and Nathan Williams are California. So is Anthony Kiedis, Gwen Stefani, and the Jason Lytle who would rather sit in a cabin than a tour bus. At least they are playing the fantastic “Every Time I’m With You” live. Bust out “Our Dying Brains” and I might jump right back on board this ship. But for now, it’s beach music and FYF Fest for this California lad. I literally went to Disneyland half-way through this review. I am California bitches.