Watch: Josh Homme asks the immortal question, "What what, in the butt?" 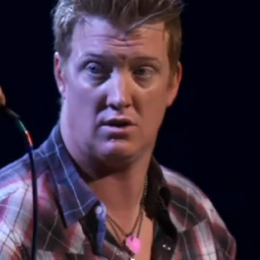 Two years ago Queens of the Stone Age/Them Crooked Vultures guitarist Josh Homme made headlines for a verbal tirade unleashed on a rowdy fan. Homme threw out some gay slurs, then threatened to rape the dude, then said some more slurs. A few days later he issued a sort-of apology that devolved into him advising his critics to “let both of your cheeks go loose so the stick will drop out.”

None of this is directly related to the video we’re about to show you, but the context makes it that much better. Chances are you’re one of the 28 million people who has viewed Samwell’s strange “What What in the Butt” clip on YouTube. If not, maybe you’re one of the millions who saw Butters perform the song in the South Park parody. In a sign that this web meme has reached the apex of weird, now Josh “I’ll butt-f*ck you in front of your friends” Homme is singing the song. The guitarist joined Samwell on Comedy Central’s Tosh.0 to turn the obnoxious tune into a groovy acoustic jam.

“‘What what in the butt’ is not only a real question, but it needs an answer,” Homme said backstage. “And the answer is, ‘Let’s do it in the butt, ok!’”

Maybe this is the musical equivelent of a politician making a racist remark, then showing up hand-in-hand with Al Sharpton at the next NAACP dinner. Or maybe just Homme just has more of a sense of humor than he gets credit for. Either way, he plays some funky acoustic guitar to complement his “in my butt” harmonies. We can only hope this a preview of the next Vultures album.