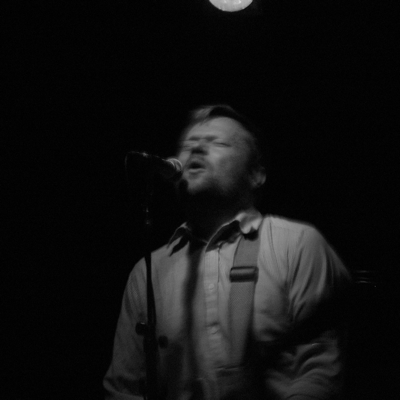 Judging from the three times I’d seen Frog Eyes in the past, Carey Mercer’s repertoire of on-stage demeanors seemed to include anxious, impish, and bothered. He would remain largely quiet throughout the set’s downtime, releasing bursts of manic energy through his vocals. To that end, happy would seem to be a bit of a stretch. But, that’s exactly what Mercer seemed to be as he took control of the stage at Chicago’s Schubas.

Unfortunately having missed an opening set from eccentric, electronic indie poppers Maus Haus, I got to the venue just in time to catch the beginning of Pearly Gate Music. Led by guitarist/vocalist Zach Tillman (backed up by an extremely skilled female bassist and a thumping female drummer, whose names I didn’t quite catch), the group takes sideways glances at both punk rock and twangy pop music simultaneously, passing both at two hundred miles an hour.

The lithe, swooning “Gossamer Hair” and the stomping, plucky “Daddy Wrote You Letters” punctuated the set, but the crowd was most enthusiastic for their cover of Bob Dylan’s “Maggie’s Farm”. The discordant strums of Tillman’s guitar and shuddering whacks of the bass were an interesting take on Dylan’s anxious stab at authority. “Take that Dylan, you academic,” Tillman added after the tune, teeth-grittingly sarcastic. Just before their last song, the drummer attributed Tillman’s constant re-tuning to having smashed his guitar into her cymbal at a recent show. As that last song ended, she had knocked over her bass drum, the pedal broken in two, as Tillman shouted “We broke everything!”

Mercer and Co. took to the stage minutes later to much applause. The band led off with an instrumental piece. Mercer and guitarist Ryan Beattie both frantically scrabbled at their frets, whereas Beattie had largely played the musical straightman to Mercer’s maniac last I’d seen the group. The lineup change in the album was even more evident live. No bassist in sight, backing vocalist/keyboardist Megan Boddy’s presence was a noted difference from the start, one hand plodding out bass lines while the other dashed out melodic passages higher in the register.

After this, Mercer was in a talkative mode. He commented on everything from the high propensity to curse when drinking whiskey to alcohol’s ranking in the scale of “good” (somewhere below “puppies, babies, and kindergarten”). He quickly jumped back into the music, though, the concussive bursts of “The Sensitive Girls” enveloping the crowd. Beattie’s squealing stabs of melody pierced through the room while Melanie Campbell’s quick, stumbling drums wrapped everything together. As usual, Mercer’s vocals were fierce and rapid.

But, just as quickly as he’d gotten away from it, he was back at the altar of banter. After noting that he used to hate between-song smalltalk, he discussed the existence of an LA Rock School, where he was “honing (his banter) chops” and how he is now “accessible to the max.” He clearly has become more comfortable with the whole process. But, the frenzied shout of “I am the bad idea” at the beginning of “Lear in Love” kicked them back off into the chaotic. The material was largely from this year’s stellar Paul’s Tomb, but “Lear” was followed by the “ecological love song” about when Mercer and wife Campbell “were first making out,” “Latex Ice Age” (originally off of 2003’s The Golden River). Later, the sparse, chilly “Violent Psalms” got an extra dose of soul from Boddy’s superb vocal harmonies. “Ship Destroyer”, from 2004’s The Folded Palm, was a revelation, chattering and crackling with energy.

But, the “encore” that followed may best demonstrate the “new” Mercer. Rather than leave the stage, Mercer decided to just play it cool: he said goodnight, then explained that instead of leaving and coming back, we were all going to have to pretend they’d left for a smoke, as they doubted we’d want another song. Then they’d hear us shouting, figure out what they should do, then come back triumphantly through the crowd, “like at the end of a marathon.” They then burst open Paul’s Tomb starter “Flower in a Glove” with all of the bravado and tingling energy they could muster. The song topped the rest of the set perfectly, capping off an interesting and exciting night of banter.