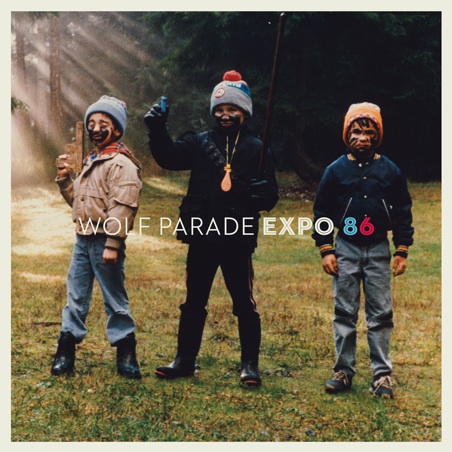 With the new indie rock practice of everyone having a side project and/or hands in collaborations across the board comes a fear with fans like me that the original bands we loved will become lesser. So far those fears have become unfounded with bands like Broken Social Scene still cranking out fantastic records even though every member (it seems) has a solo album. Hopefully The White Stripes are able to follow suit. My fingers are still firmly crossed on that one.

One band that has produced more side projects than most is Wolf Parade. Between Handsome Furs, Sunset Rubdown, Moonface, and Johnny and the Moon, their members are stretched all around. When they all came back together for the 2008 release At Mount Zoomer, the results were met with mixed views from critics. You could hear the individual writing styles of songwriters and lead singers Dan Boeckner and Spencer Krug from song to song. Their first release Apologies to the Queen Mary was far more coalesced, but that was mostly because Handsome Furs and Sunset Rubdown hadn’t hit their strides. It took quite a few listens for me to start loving At Mount Zoomer, but I did eventually love the album.

Now after a couple years of touring and recording with their respective side-projects, CNN commissions, and Johnny Depp inspiring, Wolf Parade comes back together to record its new album Expo 86. The results I expect will be mixed again, but I feel this is a much tighter and more collaborative record than Zoomer. Boeckner and Krug have successfully combined both of their musical styles on each song rather than continuing Zoomer’s problem of a song-by-song trade-off. Expo 86 successfully combines Boeckner’s penchant for fuzzy dance beats and Krug’s love for dream-like, indecipherable lyrics and Baroque song construction.

In interviews after the recording of the album, both songwriters mentioned wanting to create songs that they would want to dance to, and they both believed they accomplished this task. I agree with them completely. Expo 86, with the exception of a few slower songs, will make your feet and hips go into overdrive. Thankfully “something to dance to” didn’t collapse into the Justice/MGMT/MSTRKRFT/Passion Pit/et cetera trap of laptops and glitchy drum beats. All the songs were recorded live to tape with no overdubs (save for vocals), and that recording style gives every song a magnetic sense of urgency. There is a more upbeat, almost sunny feeling on the album. A change from their slightly morose tendencies. Krug used this same recording practice for his latest Sunset Rubdown release Dragonslayer, with amazing results, and Wolf Parade hits it out of the park with it on this album as well.

While the band does a good job of combining styles on the album, an odd thing happens on a couple songs. “Oh You, Old Thing” and “Ghost Pressure” seem to revert back to Boeckner’s pre-Wolf Parade band Atlas Strategic. The organ and guitar tones are very reminiscent of Atlas’ album Rapture, Ye Minions!, specifically the songs “Little Black Heart” and “Poison Wine” from that album. It isn’t a bad thing at all, and if anything it gives Expo 86 and the band in general the distinct sound that they had been missing since Apologies.

The album is filled with highlights, but the songs that stick out to me are album-opener “Cloud Shadow on the Mountain”, lead-single “What Did My Lover Say? (It Always Had to Go This Way)”, and four-on-the-floor rocker “Yulia”. The opening track blasts straight into the overall immediacy and energy of the album (like a great opening track should) with driving drums and Krug’s wavering voice chanting, “I was asleep in a hammock. I was dreaming that I was a web. I was a dream catcher hanging in the window of a minivan parked down along the water’s edge. I’d say that I was alone,” before exploding drums and bass take over. Krug’s lyrics are rarely easily understood, and this song is no exception. He sings of boat shoes, scorpions, and shadows. You figure out how they fit together.

“What Did My Lover Say” is another Atlas Strategic-esque track with some fantastic rising and falling and overlapping guitar lines, Krug’s trademark time signature changes, and an incredibly catchy chanted chorus. It stands in large contrast to “Yulia”, which has an almost Springsteen feel to it and a consistent meter. Boeckner’s gruff voice and presence fit the straightforward rock style perfectly. You can picture him on stage stamping his foot and shaking like an addict while he screams the closing refrain of “There’s nothing out here nothing out here” over the slamming drums.

I couldn’t find many low points on the record overall. Boeckner and Krug, as I’ve said, have gelled together their disparate styles seamlessly into a nearly flawless record. All fear I had of another disjointed album like Zoomer were put to rest quickly. There is no unnecessary organ or guitar noodling, no unnecessarily long tracks, and you can’t easily tell who might have primarily written each song.

The live recording element almost forces a collaboration between everyone in the band, as well as cuts down on the desire to overdub a song out of existence and into a prog-rock danger zone (another problem at times on Zoomer). All the songs are succinct and to the point. There is no excess, unnecessary filler. Boeckner is able to have his rock-star moments on the guitar, and Krug is able to create some fantastic piano/organ/synthesizer lines, all while keeping everything in the context of the song. Krug says he hopes to record every album like this from now on and hopes to never have to overdub again. I couldn’t agree more.